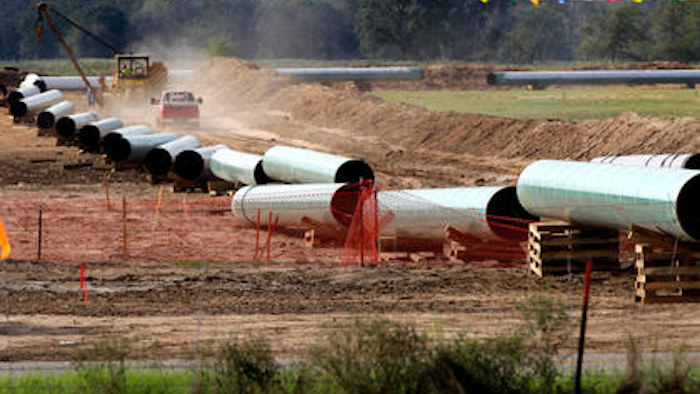 The Canadian company that wants to build the Keystone XL pipeline is taking steps to circumvent one of the major roadblocks in Nebraska.

But in seeking approval Monday for the same contentious route through the state, TransCanada could create another round of lengthy delays in an already drawn-out process.

It also indicates a new push for the $8 billion Canada-to-Texas oil pipeline in a state where opponents have repeatedly thwarted efforts to build the project. President Barack Obama has indicated that he may reject a federal permit for the project, as he did in 2012 when he accused congressional Republicans of setting an arbitrary deadline.

Former Gov. Dave Heineman approved the Nebraska route in 2013 under a state law that allowed TransCanada to use eminent domain against holdout landowners, but opponents sued and the project has been mired in state courts ever since.

The state's Public Service Commission, which regulates pipelines, taxis and other "common carriers" used for transportation, offers another avenue for approval — opponents have said they would have preferred the company use in the first place because the PSC can impose additional requirements. However, the PSC's eventual decision can be appealed.

TransCanada announced last week that it would withdraw its eminent domain claims to the land on the pipeline's proposed route and instead seek approval through the commission. Legal experts said the company may have decided not to risk a legal battle to try to uphold the 2013 pipeline-siting law, which the Nebraska Supreme Court allowed to stand by default in January. Opponents then filed a nearly identical lawsuit with landowners who were directly affected by TransCanada's use of eminent domain.

The case, which is set to go to trial Oct. 19, is widely expected to return to the state's highest court, and if it sides with the landowners, TransCanada would have to apply to the PSC anyway.

"The writing's kind of on the wall," University of Nebraska law professor Anthony Schutz said. "The prospect of losing was significant enough that they probably looked at the tea leaves and said, 'Why don't we just go forward with that process now?' "

Landowners who sued to block the project are pleased with TransCanada's PSC application, but landowners attorney Dave Domina said they want the pipeline-siting law to be invalidated to eliminate any chance that company officials try to use it again.

Domina said the decision to withdraw its eminent domain claims will delay the project further, pointing to a state law that imposes a two-year waiting period on new eminent domain proceedings if the original one is abandoned.

Attorneys for TransCanada said that law doesn't apply, because the company withdrew their lawsuits against landowners before the proceedings were officially considered "abandoned" under state law.

"Those who believe continuous delay of this project is some kind of victory couldn't be any further from the truth," TransCanada spokesman Mark Cooper said Tuesday, also noting that the company will "reinitiate" eminent domain proceedings "if necessary." Cooper said 91 percent of landowners along the Nebraska section of the route have agreed to easements, and that eminent domain is a "last resort."

The elected, five-member Public Service Commission — currently four Republicans and one Democrat — serves in a role more akin to judges than politicians. Members are forbidden from prejudging any project, and base their decisions on evidence presented by attorneys, such as a project's environmental impact, jobs created and support or opposition from local governments.

TransCanada announced the project in 2008 and has undergone repeated federal and state reviews, including a 10-month examination by the Nebraska Department of Environmental Quality. The pipeline would be built from Canada through Montana, South Dakota and Nebraska, where it would connect with existing pipelines in Steele City to carry more than 800,000 barrels of crude oil a day to refineries along the Texas Gulf Coast.