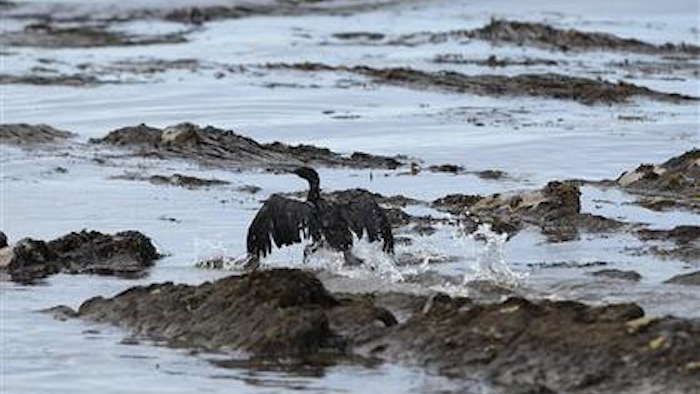 A long-delayed rule to strengthen safety requirements for pipelines that move oil and other hazardous liquids will be unveiled this month following a recent surge in accidents, the U.S. government's pipeline safety administrator said Friday.

More than five years in the making, the rule will determine if extra safety measures that are required in environmentally sensitive and populated areas should be expanded to new locations.

It was cleared by the White House this week, and the proposal will be released publicly in the next seven to 10 days, said Marie Therese Dominguez, head of the Department of Transportation's Pipeline and Hazardous Materials Safety Administration.

There were 445 pipeline accidents spilling a combined 1.9 million gallons of hazardous liquids in 2014. That marks roughly a 30 percent increase in accidents annually prior to 2008, when domestic crude production started to ramp up, largely to expanded production of shale oil in the Northern Plains and Texas.

"The proposed regulations will result in critical safety improvements, and we hope they will spark a robust dialogue moving forward about pipeline safety in the United States," Dominguez said.

She spoke during a U.S. Senate Commerce Committee field hearing on pipeline safety in Billings, not far from a 2011 Exxon Mobil pipeline rupture that spilled 63,000 gallons into the Yellowstone River.

More recently, an estimated 30,000 gallons of oil spilled into the Yellowstone in January from a BridgerPipeline LLC line near Glendive, temporarily shutting down the eastern Montana city's water supply.

In May, a corroded pipeline owned by Plains All American Pipeline released at least 101,000 gallons of crude near Santa Barbara, California.

Both 2015 accidents remain under investigation, according to federal officials.

Dominguez declined to reveal particulars on the new safety rule. But much of it is expected to deal with so-called high-consequence areas, such as rivers or densely populated communities, where the impacts of a spill or similar accident can be much greater.

About 42 percent of oil pipelines fall into those areas, said John Stoody, vice president of the Association of OilPipelines. They have more stringent inspection and repair requirements than other lines.

Phillips 66 Pipeline LLC President Todd Denton said at least one anticipated requirement under the rule — more inspections of lines using mechanical devices that travel through pipelines to identify flaws or corrosion — is something his company already is doing.

"It makes sense. We want to know what the true integrity of that line is," Denton told The Associated Press.

There are roughly 2.6 million miles of pipeline nationwide, according to the Transportation Department'sPipeline and Hazardous Materials Safety Administration. That includes the large, interstate lines that move bulk volumes of oil, natural gas and other fuels and smaller distribution lines used by utilities to pipe gas into homes and businesses.

As new lines have been added and accidents have drawn attention to gaps in federal oversight, the federalpipeline agency has added more than 100 new positions, most of them responsible for inspections and enforcement. At the urging of Montana U.S. Sens. Steve Daines and Jon Tester, officials agreed to add a second federal inspector to the one already in their state.

In the past it's taken roughly a year between the time inspections are done and when the results are delivered to pipeline operators, Denton said in testimony before the Senate committee.

"To reduce the risk of a spill, you want to make sure the operators get the inspection (results) as quickly as possible," he said.