EPA spokeswoman Laura Allen said water-quality test results were made public as soon as they were validated. 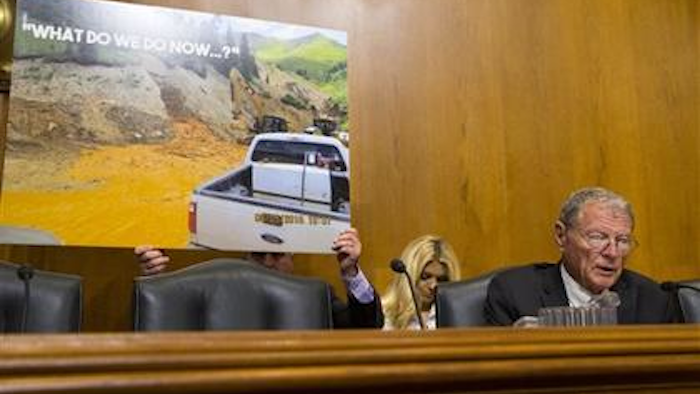 Federal regulators refused to share water-quality data for weeks following a blowout of toxic wastewater from a Colorado mine that fouled rivers across the Southwest, a New Mexico official said Thursday.

The move by the U.S. Environmental Protection Agency aimed to downplay the severity of the spill, hobbling the state's response, said Ryan Flynn, New Mexico secretary of Environment and Natural Resources.

His criticisms, which came in statements prepared for delivery before a U.S. House committee investigating the Aug. 5 accident, offered more fodder for congressional Republicans eager to find fault with a federal agency they perceive as having an anti-business agenda.

An EPA cleanup team accidentally triggered the 3 million-gallon spill as it was doing excavation work on the inactive Gold King mine near Silverton, Colorado. The plume turned the Animas River there a sickly mustard yellow, and the pollution tainted with heavy metals flowed downstream to New Mexico and Utah.

EPA spokeswoman Laura Allen said water-quality test results were made public as soon as they were validated. The agency has closely coordinated with state officials and American Indians from the Navajo Nation, Southern Ute and Ute Mountain Ute tribes, Allen said.

Thursday's hearing before the House committees on Natural Resources and Oversight and Government Reform was the fourth this month examining the spill. Republican lawmakers have used the events to bash the EPA for its handling of issues ranging from climate change to stream protection.

Democrats have sought to put the focus on the mining industry and ongoing pollution from tens of thousands of abandoned mines across the country.

The Colorado spill came from a cluster of century-old mines in the San Juan mountains that together discharge an estimated 330 million gallons of toxic wastewater annually, EPA Administrator Gina McCarthy testified. That's over 100 times more pollution than the Gold King spill.

"We were trying to get a handle on a situation that was growing increasingly dangerous," McCarthy said. "This is not the EPA's ... finest hour. But I am here to tell you that we are taking responsibility."

She added that mining companies contribute "close to zero" money to help clean up such sites under an 1872 mining law that the administration of President Barack Obama has proposed to change.

The EPA suspended cleanup work and site investigations at 10 polluted mining complexes in four states because of conditions similar to those that led to the August spill. Four sites are in Colorado, three in California, two in Montana and one in Missouri.