Egypt is making a gradual economic recovery from the years of chaos that followed the 2011 uprising. 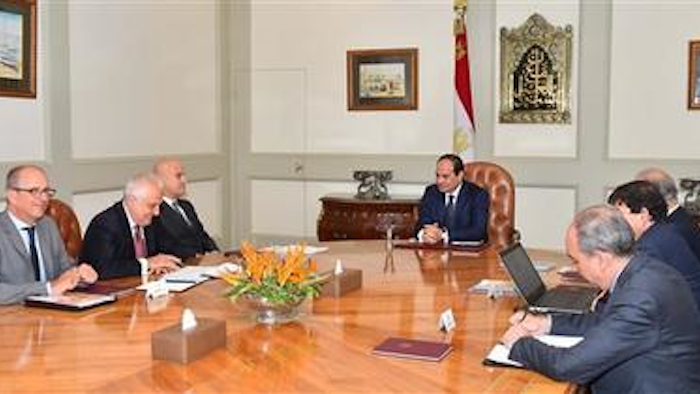 The discovery of a huge gas field off Egypt's coast promises to ease a long-running fuel crisis and boost the economy after years of unrest, but it will take years to develop and won't bring Gulf-style riches to the Arab world's most populous country, experts said Monday.

The new "supergiant" offshore Zohr field, revealed a day earlier by Italy's Eni SpA and billed as the "largest-ever" found in the Mediterranean Sea, could alleviate Egypt's need for gas imports in the coming years, when a booming population will lead to a spike in domestic demand.

The latest discovery — potentially 30 trillion cubic feet of gas — represents about half of Egypt's current needs, and would add to its current 65 trillion cubic feet, cut its trade deficit and bring in tax revenue when it comes online in some five years, said Angus Blair of investment advisory firm Signet.

"It's a very useful positive economic factor in Egypt," he said. "Obviously it will help President (Abdel-Fattah) el-Sissi and the government, but to look at it very practically, and economically, it has just come at a very good time."

Egypt is making a gradual economic recovery from the years of chaos that followed the 2011 uprising. Rolling power cuts have been a regular feature of life since the overthrow of President Hosni Mubarak, as the country was ruled successively by the military, an Islamist president and then a military-backed government. However, this summer Cairo was largely spared the outages.

El-Sissi has staked his legitimacy on fixing the economy, and has made energy projects a priority. Last March, authorities signed a $4.6 billion contract with Germany's Siemens AG to build a new 4.4-gigawatt power plant in southern Egypt and generate 2 gigawatts of wind power.

Combined with other agreements signed with Siemens, and the U.S. firm General Electric, Cairo hopes to boost electricity generation by a third. The new gas discovery would be used to generate electricity but also fuel industry, whose growth has been lagging due to shortages.

Petroleum Ministry spokesman Hamdi Abdelaziz said the monetary value of the gas has yet to be determined, but that it would be extracted for domestic consumption only. "We hope to become self-sufficient by 2020," he said.

Given the country's surging population of 90 million, growing at over 2 percent per year, Egypt desperately needs new energy sources. Until the latest discovery, that would have meant importing gas from the Gulf and neighboring Israel.

The new find could be twice as large as Israel's recently discovered Leviathan field, however, potentially scrapping the need for imports from the Jewish state. Gas imports from Israel have long been unpopular in Egypt because of the Arab-Israeli conflict.

"Egypt will not need to import gas from Israel, and it might be able to restart some gas exports," said Robin Mills, a non-resident fellow for energy at the Brookings Doha Center.

Israel had been eyeing Egypt as an export market for the new reserves it has discovered, and politicians there were scrambling on Monday to explain why they had not been exploited faster, before the discovery of the new field.

"We need to say the truth — this is a painful wake-up call for our really foolish conduct, where for years we have been stalling the searches, stalling development," Energy Minister Yuval Steinitz told Army Radio. "Nothing is moving."

Facing accusations from the media and opposition lawmakers that it has given sweetheart deals to gas companies, the Israeli government has struggled to approve a policy for exporting its natural gas. The criticism has focused on issues like gas prices, how much gas should be exported and how to divide revenues.

The new Egyptian field is small compared to the vast reserves of Gulf countries such as Qatar, with over 860 trillion cubic feet, and the United Arab Emirates, with 215 trillion — both countries with tiny populations and thus large amounts available for export.

"The gas find is a windfall, but it doesn't take Egypt into the league of major gas producers," said Simon Kitchen, a strategist at Egypt's EFG Hermes bank. "It should support a recovery in Egypt's industrial output, (but) the risk is that the windfall income created by the find leads Egypt to freeze much-needed economic reforms."