Members of a federal cleanup crew were initially trapped and unable to warn downstream communities about the accident. 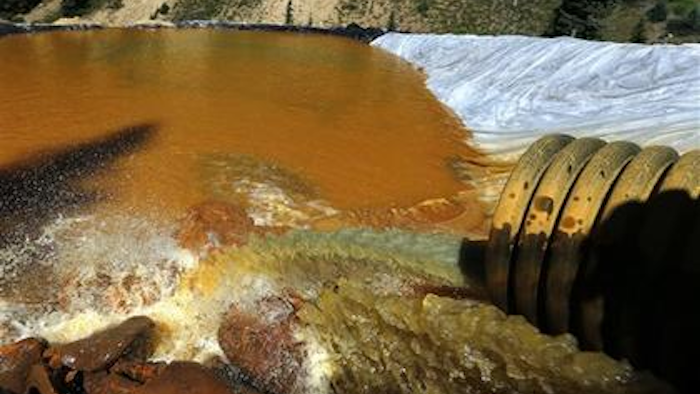 Members of a federal cleanup crew were initially trapped and unable to warn downstream communities that they had accidentally unleashed toxic wastewater from a Colorado gold mine, according to government documents released Thursday.

During that time, a trickle of water started by excavation work at the site grew to a torrent and 3 million gallons eventually poured out of the remote Gold King Mine near Silverton, fouling downstream rivers in Colorado, Utah and New Mexico.

The federal Environmental Protection Agency released the documents after coming under increasing political pressure to explain how the Aug. 5 accident occurred and why it took so long to issue the warning.

The documents show the site outside the mine was largely destroyed just 20 minutes after the spill began, with the rust-colored water also washing out the sole access road and submerging a Chevrolet Suburban used by the workers.

With no satellite phone or cell phone service, workers had to use a two-way radio to notify a state regulator inspecting another mine in the area. The state worker notified outside authorities 96 minutes after the spill was first triggered, according to the documents.

However, some downstream communities in New Mexico were not notified about the late morning spill of the water laced with lead, arsenic and other heavy metals until the next day.

Another report on Wednesday summarizing the EPA's internal investigation appeared to minimize the agency's responsibility by suggesting a blowout was inevitable and likely could not have been avoided.

Members of Congress and Colorado's attorney general have said they're not satisfied with the explanations by the agency.

"This new report cannot excuse their liability in causing the spill and the negative impact it is having downstream," said U.S. Sen. John Barrasso, R-Wyoming. "The EPA will have to explain to the American people how this happened."

Barrasso chairs the Senate Indian Affairs Committee and has scheduled a Sept. 16 hearing on the spill. It's one of a series of hearings on the accident planned by Republicans once Congress returns from recess.

The EPA investigation also determined that federal and state regulators mistakenly concluded water pressure inside the mine was not high enough to cause an accident.

That turned out to be wrong, and the pressure blew when the government cleanup team started cleanup work on the site.

EPA Deputy Administrator Stan Meiburg said Wednesday that underestimating the water pressure inside the mine workings "was likely the most significant factor relating to the blowout."

The internal investigation also revealed that regulators could have drilled into the mine to get a better gauge on how much pressure had built up but did not.

The Associated Press reported Saturday that EPA managers knew that a release of "large volumes of contaminated mine waters" was a possibility as early as June, 2014. The concerns were repeated in a May work plan from an agency contractor.

Other investigations are being done by the EPA's inspector general and the U.S. Interior Department. But Colorado Attorney General Cynthia Coffman said an outside review "is a must."

"I don't trust the EPA or this administration to investigate itself," said Coffman, a Republican. "It would never have allowed BP to investigate the Deepwater Horizon oil spill."

The toxic sludge released from the mine prompted the temporary shutdown of some public drinking water and irrigation systems and tainted hundreds of miles of rivers.