While exports of the fuel to lucrative Asian markets have surged in recent years, the rules for leasing government-owned coal have remained largely unchanged since 1990. That's stirred concerns that companies could be shortchanging taxpayers by buying coal cheaply from the government based on U.S. market prices and then selling it at a premium overseas. 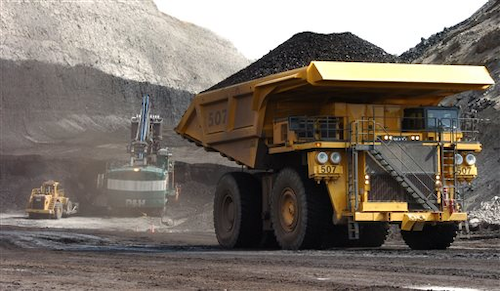 Citing a new report by investigators at the non-partisan Government Accountability Office, U.S. Sen. Edward Markey, D-Mass., called for the sales to be suspended until the problems are rectified.

Further details on losses — including when they occurred and how much coal was involved — were not provided, drawing skepticism from the coal industry.

More than 40 percent of U.S. coal production, or about 450 million tons a year, comes from public lands leased by the government to mining companies under the century-old Mineral Leasing Act. Those leases bring in more than $1 billion in annual revenue.

While exports of the fuel to lucrative Asian markets have surged in recent years, the rules for leasing government-owned coal have remained largely unchanged since 1990. That's stirred concerns that companies could be shortchanging taxpayers by buying coal cheaply from the government based on U.S. market prices and then selling it at a premium overseas.

A sweeping, 19-month examination of the Interior Department's coal-leasing program by the GAO revealed widespread inconsistencies in how the government values public coal reserves that are leased to private mining companies.

The GAO also found a near-total lack of competitiveness in the leasing program. Almost 90 percent of the 107 coal tracts leased since 1990 received just a single bid.

Without those problems, the government's coal sales could have brought in $200 million in additional revenue — and possibly hundreds of millions more, said Markey, who requested the GAO study in April 2012.

"Taxpayers are losing out so that coal companies can reap a windfall and export that coal overseas where it is burned, worsening climate change. This is a bad deal all around," Markey said in a statement released by his office.

Markey said the lost-revenue figure was based on his staff's analysis of recent coal leases detailed in a second GAO report not made public because of concerns it contained confidential business information. The program appears to have benefited a few coal companies that may have leased federal coal reserves at "bargain-basement prices," he said.

In response to the publicly released GAO report, the Interior Department said it already has begun implementing reforms within the coal-leasing program run by the Bureau of Land Management. The agency said it agreed with GAO's recommendations, including increased scrutiny of coal sales by bringing in independent reviewers and making the process more transparent.

Interior spokesman Blake Androff said agency officials could not respond to Markey's claims on potential lost revenue because they had not seen his calculations.

The second GAO report referred to by Markey could not be released because it was designated as "sensitive but unclassified" by the Interior Department, said GAO spokesman Ned Griffith.

Most federal coal is in western states, and money derived from leases and royalties is split equally between federal and state governments.

The GAO's finding that the government has failed to keep pace with the shift to exports was in line with an investigation last year by the Interior Department's Inspector General's Office. That earlier probe, based on a more limited review of coal sales, estimated losses to taxpayers of $62 million.

The Ohio-based Institute for Energy Economics and Financial Analysis, a group with environmental ties, has pegged lost revenues at more than $30 billion since the early 1980s, when many of the rules governing the industry were last revised.

Most of the fuel is burned in U.S. power plants. But as domestic sales have lagged amid competition from cheap natural gas, more U.S. coal has been shipped abroad.