Hundreds Turn Up For MN Mine Forum

Advocates wanting to bring back jobs to the Iron Range squared off against environmentalists concerned about polluting a pristine corner of the state at a public hearing Thursday on a proposed copper-nickel mine in northeastern Minnesota. 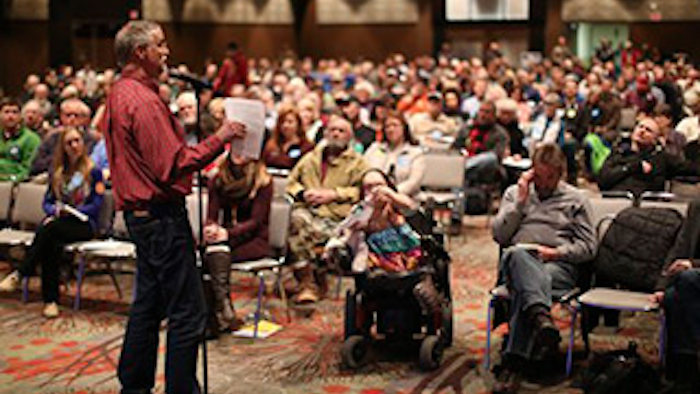 DULUTH, Minn. (AP) — Advocates wanting to bring back jobs to the Iron Range squared off against environmentalists concerned about polluting a pristine corner of the state at a public hearing Thursday on a proposed copper-nickel mine in northeastern Minnesota.

An estimated 1,300 to 1,500 people turned out at the Duluth Entertainment Convention Center for the first of three forums on PolyMet Mining Corp.'s proposed open-pit mine near Babbitt and processing plant near Hoyt Lakes.

People streamed in before the five-hour hearing, the Star Tribune (http://strib.mn/1dza9uS) reported. No signs were allowed, but most attendees wore stickers that said either "I support jobs," or "Who Pays for Pollution?"

About 500 people from that area arrived on seven buses provided by Minnesotans for Jobs, a pro-mining organization created by the Minnesota Chamber of Commerce, several labor unions, Minnesota Power and other business interests.

"We've been kicking this around for years," said Frederick Boger, a heavy equipment operator. Boger said he wanted to see how PolyMet planned to engineer the tailings pit, and he said that if it was built right, it would be safe. But if contractors take shortcuts during construction, it won't be, he said.

"Anything that brings jobs to this part of the country is a great thing," he said. "As long as it's done the way it's supposed to be done."

John Schmidt of Duluth said the environmental risks of a new mining project are too great.

"We made a commitment that we would leave this place a better place. There are too many unanswered questions," Schmidt said.

The open house, which began at 5 p.m., and hearing were intended to give the public a chance to learn about the mine proposal and, more specifically, to comment on a massive draft environmental review released by the Minnesota Department of Natural Resources last month.

The DNR and other agencies had tables and booths at the hearing with detailed maps and information about emissions, mercury, water quality and other environmental issues.

Native American tribes from the region, who have disputed several conclusions by public regulators, were also allowed to present their views during an open house before the formal hearing, which began at 6:45 p.m.

"This is a sign of progress," said Nancy Schultz, environmentalist for the Fond du Lac Band of Chippewa.

Mike Dahl, a member of the White Earth Band of Chippewa, said he came because he is worried about how more mining will affect wild rice and the sturgeon, an ancient fish that has only recently made a comeback in the St. Louis River.

"If something happens to the rice and the sturgeon here, then what will we have," Dahl said.

Similar meetings are scheduled for Aurora on Jan. 22 and St. Paul on Jan. 28. The DNR is also taking written comments through March 13.