Initial tests show water supplies in a Montana city show no sign of a cancer-causing element for the first time since they were contaminated by a weekend crude oil spill, a state official said Thursday, raising hopes that thousands of residents can soon start drinking from their taps. 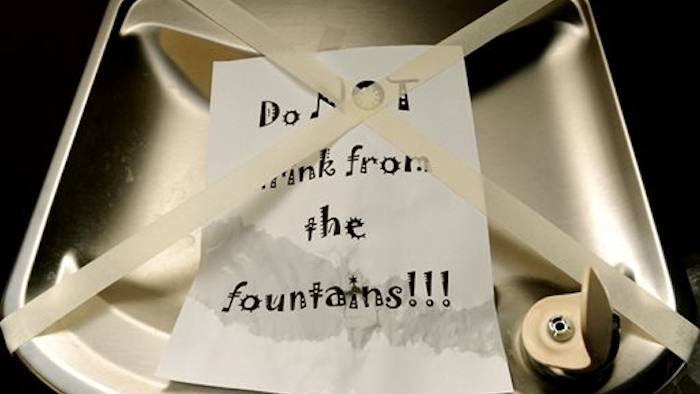 BILLINGS, Mont. (AP) — Initial tests show water supplies in a Montana city show no sign of a cancer-causing element for the first time since they were contaminated by a weekend crude oil spill, a state official said Thursday, raising hopes that thousands of residents can soon start drinking from their taps.

Glendive's water no longer shows elevated levels of benzene, a carcinogenic component of oil, in tests taken from fire hydrants, said Jeni Garcin with the Montana Department of Environmental Quality.

If a laboratory confirms the results, officials will ask the city's 6,000 residents to flush their taps by running them for 10 minutes. After that, the water would be drinkable.

Glendive resident Whitney Schipman said she was getting tired of using bottled water for everything from cooking to brushing teeth and bathing her young nieces.

"You don't realize how much water you use until you can't use your water," she said. "It's a lot of work, like going back to old-fashioned days."

Residents have been told not to drink or cook with city water since Monday night, two days after a 40,000-gallon oil spill from a pipeline about 6 miles upstream along the Yellowstone River. They have been using bottled water trucked in by the pipeline owner, Bridger Pipeline.

Most of the oil remains trapped beneath the river's frozen surface. On Thursday, government regulators and representatives of the Poplar Pipeline owner still were trying to set up sites downstream where some oil might be recovered by cutting holes into the ice.

"We've got 22,000 feet of boom available for deployment," said Bridger spokesman Bill Salvin. "Unfortunately, there's just not a lot of place to deploy boom" to capture the oil.

Glendive's water treatment plant installed more filters to catch any additional oil that gets into its intake line.

Oil sheens have been reported as far away as Williston, North Dakota, below the Yellowstone's confluence with the Missouri River, officials said.

The farthest downstream that free-floating oil has been seen was at an intake dam about 28 miles from the spill site, officials said.

The accident, which marks the second large oil spill into Montana's Yellowstone River in less than four years, has revived questions about oversight of the nation's aging pipeline network.

The Poplar Pipeline was constructed in the 1950s. The breached section beneath the Yellowstone was replaced at least four decades ago, in the late 1960s or early 1970s, according to the company.

Based on the number of miles of pipelines in the U.S. that carry oil, gasoline and other hazardous liquids, just over half were installed prior to 1970, according to the U.S. Department of Transportation.

The agency's Office of Pipeline Safety has roughly 150 inspectors overseeing 2.6 million miles of gas, oil and other pipelines.

That number is slated to increase by another 100 inspectors under a $27 million budget increase approved last year.

Democratic Sen. Jon Tester has said that more frequent inspections by regulators are needed and that older pipelines should face stricter safety standards.