President Barack Obama's determined efforts to combat global warming face their biggest trial yet as Republicans take full control of Congress this week. The Republicans vow to move fast and forcefully to roll back his environmental rules and force his hand on energy development. The first order of business... 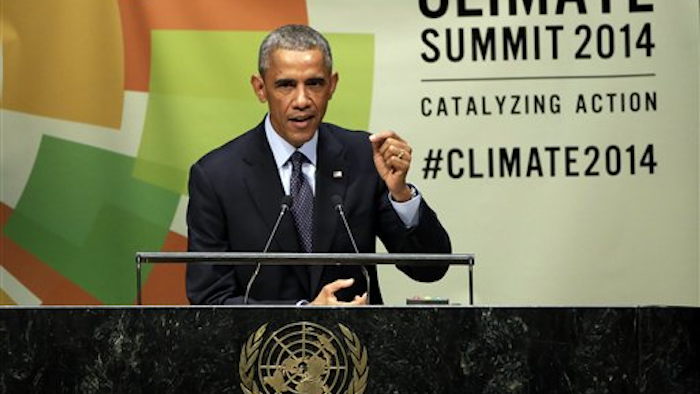 The first order of business: the Keystone XL pipeline. The Republican-led House has repeatedly passed legislation to approve the pipeline, which would carry tar sands oil from Canada deep into the United States. The bills died in the Senate when Democrats were in control, but that will change Wednesday when a Republican-led Senate committee holds a Keystone hearing.

Success for Republicans on the climate front would jeopardize a key component of Obama's legacy. And the ramifications would likely ricochet far beyond the United States.

Later this year, nations are supposed to sign a major global climate treaty in Paris. Aggressive action by the U.S. under Obama has upped the pressure on other governments to get serious about climate change, too. But if Obama cannot make good on his commitments at home, it's unclear whether poorer nations will still feel compelled to act.

"The American government has been responsible for sending very strong political and economic signals with what they have announced so far," former Mexican President Felipe Calderon, now a global climate leader, said in an Associated Press interview. "I know that there is a risk that those will be overcome by the new political reality in the U.S."

Obama has made clear he will use his veto power if Congress succeeds in getting climate change bills to his desk. "I'm going to defend gains that we've made on environment and clean air and clean water," he has said.

And Sen. Brian Schatz, a Democrat, says the Republicans aren't likely to overturn his veto. That would require a number of Democrats to vote against the president because a two-thirds majority is needed in the 100-member Senate to overcome a presidential veto. Republicans control 54 seats.

By design, Obama's biggest steps on climate rely on existing laws and don't explicitly require Congress to act. But Republicans can try to undercut them before they take effect. Republicans argue that Obama's coal plant emissions limits, for example, would devastate local economies and hamper job-creation.

These are some of the most likely ways the Republicans will try to stop Obama on climate change, as described by Republican leadership aides:

—After Wednesday's hearing on Keystone, Republican senators plan to work on the bill's details on Thursday and then start debating the legislation next week. The Senate could vote soon after Obama's Jan. 20 State of the Union address. A separate House vote on Keystone could come as early as this week.

That makes Keystone likely to be one of the first bills to hit Obama's desk in 2015. White House aides decline to say how they might respond until they see the final Republican bill. But in his most recent news conference, Obama spoke at length about how Keystone would basically save money for Canadian energy producers, with negligible effects for U.S. gasoline prices or American jobs.

— Republicans aim to pass legislation forcing Obama to certify — before his regulations on power plants take effect — that they won't drive up power prices or eliminate jobs. Attaching that requirement to a broader spending bill would make it harder for Obama to veto without jeopardizing other government spending.

In the "defund" approach, Republicans could pass bills prohibiting the government from spending any money to implement his environment regulations.

— The Republicans could try to block Environmental Protection Agency regulations directly. The Congressional Review Act enables such resolutions to pass the Senate with a simple majority vote, meaning Democrats couldn't delay them, once the regulations became final. That's scheduled to happen this year for Obama's carbon dioxide rule, which aims to cut power plant emissions nearly a third from 2005 levels.

— Lawmakers could refuse to give Obama the $3 billion he has already pledged on the country's behalf to a global fund to help poorer nations address climate change. Obama hasn't yet asked Congress for any money to fulfill that pledge. The White House says the administration will make its first request in its budget plan for fiscal year 2016, which begins Oct. 1.