A Look Into GE's "Christmas Trees"

It’s not quite the North Pole, but the Christmas season seems to be always on at the Bridge of Don plant in Aberdeen, Scotland, where GE builds massive machines for subsea oil and gas exploration. That’s because workers at the plant make Christmas trees, an industry nickname for huge mechanical systems that control the flow of oil... 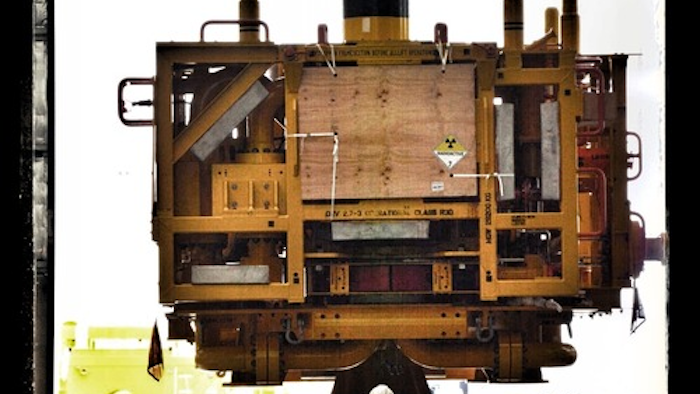 It’s not quite the North Pole, but the Christmas season seems to be always on at the Bridge of Don plant in Aberdeen, Scotland, where GE builds massive machines for subsea oil and gas exploration. That’s because workers at the plant make Christmas trees, an industry nickname for huge mechanical systems that control the flow of oil and gas from subsea wells.

The machines, which can weigh north of 100 tons, got their name because they come “decorated” with a variety of valves, spools, and fittings. But that’s where resemblance to any real Christmas tree ends. Painted bright yellow so they could be easily located in the sea bottom murk, each Christmas tree is precisely tailored for the specific site where it’s going to work. “Depending on the field, there will be different conditions, different temperatures, different pressures of gas or oil coming out,” says Graham Atkinson, Engineering, Procurement and Construction project director at GE Oil & Gas’ Bridge of Don facility.

Unlike their living room namesakes, workers in Aberdeen make subsea trees that last over two decades and work more than a mile under the surface of the ocean. They must handle operating temperatures ranging from freezing to nearly 350 degrees Fahrenheit. While the outside casings and structure are made from extremely strong steel, the insides hold extraordinarily precise components where the allowed deviation in size in some valves is just two microns.

The Scottish plant is currently working on a batch of 22 trees that will help control the flow of gas from the huge INPEX-operated Ichthys LNG Project in the Browse Basin located more than 120 miles off the coast of Western Australia.

One cold and misty Scottish Saturday morning last September, workers at the GE plant dispatched the first of their trees for Australia. “Christmas trees are a common sight on the streets of Aberdeen,” Atkinson says. “But we’ve got to move them at unsociable hours, and only on the weekends, to make sure we don’t have too much traffic being disrupted.”

It took the team several hours to move the tree from the plant to the harbor and load it aboard of the Australia-bound MV Schokland.

Forty-three days later, the ship arrived in sunny Perth. By then, the tree had already gotten its first taste of the rough seas around the notoriously stormy Cape of Good Hope at the southern tip of Africa. “You just can’t mitigate for bad weather,” Atkinson says.

Once in Australia, the Christmas tree traveled overland for testing to GE’s technology center in Jandakot, just south of Perth. First step was to position the multi-ton Christmas tree precisely on the bed of the truck. “I know it sounds silly, but as little as one degree off on the loading and the trees could have fallen over,” says Paul Iredale, regional logistics leader for GE Oil & Gas Australia.

GE equipped the Jandakot facility with special 20-foot-deep testing bunkers designed to mimic the intense operational pressures the Christmas trees will experience in the open ocean. “We test them up to operational pressures of 15,000 pounds per square inch,” said Martin Birse, a technician at the site. “That’s 500 times greater than a car tire, or 1,020 times greater than the pressure of air at sea level.”

The team at Jandakot will also customize each tree to suit the depth, water pressure and contours of the floor at the site the well where it will be working. “From the outside, the trees look similar, but they can be very different on the inside,” Birse says. “Once they’re in place, you don’t want to have to bring them back to the surface for repair.”