Future Cloudy As Work Winds Down At Avondale Shipyard

Avondale Shipyard, once Louisiana's largest private employer, is quietly winding down operations, nearly six months after Huntington Ingalls Industries brought in one of the country's largest pipeline and terminal operators in hopes it could help turn the 76-year-old West Bank facility into a... 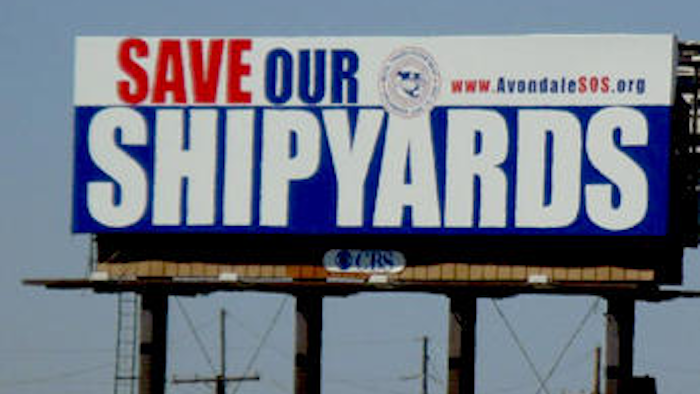 Avondale Shipyard, once Louisiana's largest private employer, is quietly winding down operations, nearly six months after Huntington Ingalls Industries brought in one of the country's largest pipeline and terminal operators in hopes it could help turn the 76-year-old West Bank facility into a commercial manufacturer for the booming oil and gas industry.

At most, only a few hundred employees remain at the site, where Huntington Ingalls has been trying to lure commercial work for more than a year. But during that time, the company has steadily told investors that closing the shipyard is the most likely outcome.

Now, as Avondale workers finish building the shipyard's last scheduled components for a U.S. Navy warship, the company's mixed mindset has cast a pall over the already-complicated task of finding a second act for the facility. It also has caused a rift between the company and local and state officials, who are anxious about potential job losses and eager to find a partner for a manufacturer that for decades was a key source of high-paying, blue-collar jobs.

"I think that public message has hurt our efforts in a very meaningful way," said Stephen Moret, the state's secretary of economic development. "That's one place where I would say I've been most disappointed about their approach because I think it has created credibility problems for the company."

"If they're going after fabrication work for the offshore oil and gas industry, it kind of sends a mixed message to say that 'we're shutting down, yet we're trying to finalize some contracts to keep us open,'" he said.

In late 2011, after defense giant Northrop Grumman Corp. shocked the region by announcing that it would close Avondale in order to consolidate its shipbuilding operations in Mississippi, Louisiana economic development officials offered a $214 million incentive package to help pay for workforce training and major upgrades to the shipyard if it could find a partner to keep the site operational and maintain 3,850 full-time workers.

Those incentives are still on the table, Moret said. But at this point, state officials have mostly tempered their expectations of keeping that many jobs. They likely would celebrate an opportunity to save even half that many.

"I'm a bit disappointed," Moret said. Huntington Ingalls "didn't really dig in more strongly earlier, but I think one of their challenges has been that they're very interested in managing their communications with investors and Wall Street and not wanting to make any misleading or overly optimistic statements."

When it was announced earlier this year, the agreement between Huntington Ingalls and Kinder Morgan Energy Partners offered more by hope than solid plans. The two companies planned to study potential uses for the shipyard, including manufacturing and terminal operations, to determine whether a partnership to redevelop the site could be economically viable.

Beci Brenton, spokeswoman for Huntington Ingalls, a spin-off company created by Northrop Grumman to handle its shipbuilding business in 2011, said the company has reopened a small outfitting yard in Waggaman that was shuttered for several years. Some suggest the yard could become a future center for work because it is only a fraction of the shipyard's size.

"We continue to explore best-use opportunities to redevelop Avondale with Kinder Morgan, and we continue to seek work for Waggaman," Brenton said.

The number of workers at the Avondale site began to fall sharply last year after work was completed on the last Navy warship built from the keel up at the shipyard. That was the amphibious transport dock Somerset, a 684-foot-long ship used to transport Marines, equipment and supplies.

Since then, the company has moved ahead with plans to build ships exclusively in Pascagoula, Mississippi, while continuing to assemble some components at Avondale. But even that work is expected to dry up by the end of October, Brenton said.

More recently, she said, Avondale's workforce has been trimmed to about 300, down from nearly 1,500 last October and 5,000 a few years ago.

Andrew Croom, president of the New Orleans Metal Trades Council, offered an even starker picture of current employment levels, saying only 132 employees are left at the facility, including five who staff the Waggaman site.

There's been no shortage of ideas for remaking Avondale. Converting it into a general-purpose industrial park — as happened in Philadelphia in the mid-1990s when the country's oldest naval shipyard closed, leaving thousands jobless — was an early favorite talking point. But that idea went nowhere.

Other, more radical ideas were kicked around but also failed to gain much traction.

"We never saw this coming," said Croom, 62, recalling the 2010 announcement that the shipyard would close. He retired last fall after working there for more than four decades.

Looking ahead, most industry experts say turning to the oil and gas industry for work is a logical move for Avondale, given its skilled workforce, huge facilities and proximity to the Gulf of Mexico.

In November, Brenton said, Huntington Ingalls will have to begin making final plans for the facility while maintaining a workforce of about 200, largely engineers and others who will support ships being built elsewhere.

She declined to comment on suggestions by Louisiana officials that the company did not do enough early on to land commercial contracts for the facility.

Warren Fairley, an executive with the International Brotherhood of Boilermakers, said Huntington Ingalls' future in the area likely will be centered on the Waggaman site, which he credits the company with having "worked pretty hard" to get up and running.

"The little shop looks good. They're ready to go," he said. "They just have not been successful in securing any work, for whatever reason."

Fairley is still optimistic Huntington Ingalls will find commercial work to keep the facility going, though from what he can tell, nothing is imminent, and it may take three months or more to get a new project up and running.

"There is an unprecedented amount of work coming up along the Gulf Coast from Texas to Lake Charles to even over in Alabama," he said. "The amount of work in the oil and gas industry in the Gulf Coast is going to be something like I've never seen in my career, so because of that, their supplier base is going to grow by a large degree, and I think Avondale is well-positioned to participate in that."

In the meantime, local officials, including Young, have their fingers crossed that something will come together, though they say the matter is largely beyond their control.