Britain has agreed to build the country's first nuclear power plant in a generation, ignoring concerns raised by the Fukushima meltdown in Japan as the U.K. seeks to secure its future energy needs and cut greenhouse gas emissions. 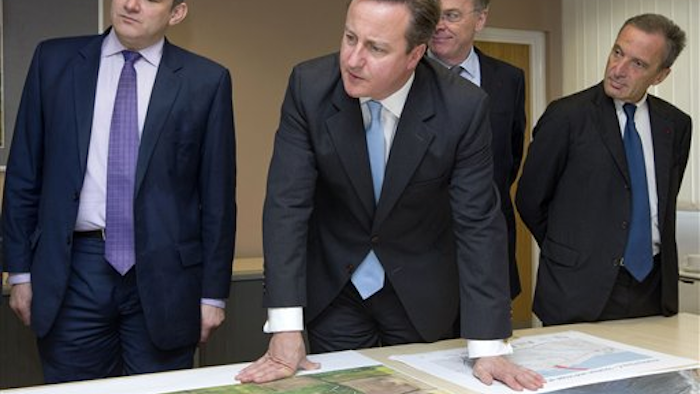 LONDON (AP) -- Britain has agreed to build the country's first nuclear power plant in a generation, ignoring concerns raised by the Fukushima meltdown in Japan as the U.K. seeks to secure its future energy needs and cut greenhouse gas emissions.

The government struck a deal with Electricite de France and a group of Chinese investors Monday to build the country's first nuclear power plant since 1995 — a massive project that will bring in 16 billion pounds ($25.9 billion) of investment to keep the lights on amid declining supplies of North Sea gas and rapidly escalating fuel costs.

"If people at home want to be able to keep watching the television, be able to turn the kettle on, and benefit from electricity, we have got to make these investments," Energy Secretary Ed Davey told the BBC. "It is essential to keep the lights on and to power British business."

The deal for the new reactor, which will be built at Hinkley Point in southwest England, underlines the desperation politicians across Europe face in meeting energy needs amid dwindling fossil fuel resources and rising costs.

Germany decided two years ago to shut down all of its nuclear power plants by 2022, following years of anti-nuclear protests and the shock of the meltdown at Fukushima, Japan in 2011. But the effort needed to ramp up renewable energy sources to replace domestic nuclear reactors is proving to be costly: not only do many new wind, solar, water and biomass plants need to be built, but Germany's energy grid has to be overhauled to balance the fluctuating supply such power sources provide.

One of the last barriers to the British deal was removed during a visit to Asia last week by Treasury chief George Osborne, who announced that Chinese firms would be permitted to invest in civilian nuclear projects.

The new reactor won't start generating power until 2023, but the deal stipulates the amount operators will be able charge for electricity to ensure they will be able to recoup the costs of the project.

The deal is also a boon to China, which relies on foreign technology for its generating stations and is trying to develop its own reactors.