TransCanada: Pipeline Would Not Affect Climate

Alex Pourbaix, TransCanada's president for energy and oil pipelines, said opponents of the proposed Keystone XL pipeline have grossly inflated its likely impact on emissions of greenhouse gases that contribute to global warming. Canada represents just 2 percent of global greenhouse gas emissions, Pourbaix said at a forum sponsored by a manufacturing group that supports the pipeline. 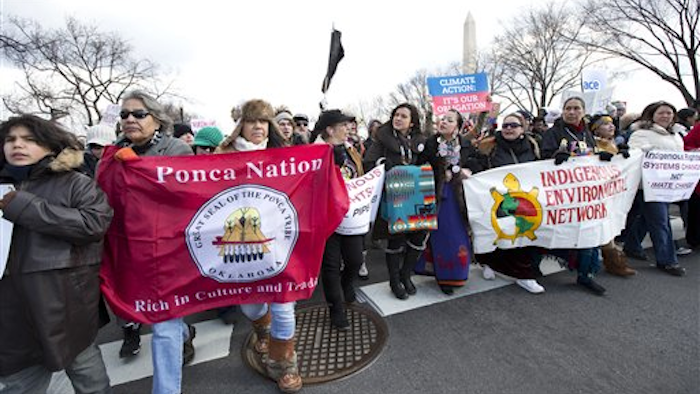 WASHINGTON (AP) -- In a shift in strategy, the company that wants to build an oil pipeline from western Canada to Texas said Tuesday that the project will have no measurable effect on global warming.

Alex Pourbaix, TransCanada's president for energy and oil pipelines, said opponents of the proposed Keystone XL pipeline have grossly inflated its likely impact on emissions of greenhouse gases that contribute to global warming.

Canada represents just 2 percent of global greenhouse gas emissions, Pourbaix said at a forum sponsored by a manufacturing group that supports the pipeline. Oil sands concentrated in Alberta, where the 1,700-mile pipeline would start, make up 5 percent of Canada's total, Pourbaix said.

Pourbaix's comments came two days after a rally Sunday by pipeline opponents drew an estimated 35,000 people to Washington. Organizers, including the Sierra Club and other environmental groups, billed the event as the largest climate rally in U.S. history. Thousands of people marched past the White House to urge President Barack Obama to reject the $7 billion pipeline and take other steps to fight climate change.

At Tuesday's forum, organized by the National Association of Manufacturers, Pourbaix took on the climate argument head-on. He and other TransCanada executives have previously emphasized the pipeline's safety, the jobs it will create and the fact the oil comes from a U.S. neighbor and ally.

"Our opponents are trying to make this debate about GHGs," he said, referring to greenhouse gases such as carbon dioxide that are emitted as oil is produced and refined. "So let's look at Canada's contribution to global GHGs."

Pourbaix called Canada a leader on climate change and noted that Alberta was the first jurisdiction in North America to regulate greenhouse gas emissions. The province also has imposed a carbon tax, an action the Obama administration has said it will not propose.

Oil carried by Keystone will displace heavy crude from Venezuela, Nigeria and other countries that also contributes to global warming, Pourbaix said. "You could shut down oil sands production tomorrow and it would have absolutely no measurable impact on climate change," he said.

Michael Mann, a climate scientist at Pennsylvania State University, said Pourbaix's comments appeared to be based on "some rather rosy assumptions" about oil sands production. First, the calculation does not take into account the energy cost of refining and transporting the oil from tar sands, nor does it account for a huge reserve that could make the Alberta tar sands a key contributor to global warming in the future, he said.

By endorsing the pipeline, "we may be insuring that a much larger amount (of the oil reserves) will be economically viable," Mann said.

Obama calls climate change a serious threat and has urged Congress to combat it. In his State of the Union address last week, Obama said he will use executive authority to cut greenhouse gas pollution if Congress fails to act.

Obama has twice thwarted the Keystone XL pipeline because of concerns about its route through sensitive land in Nebraska, but has not indicated how he will decide on the pipeline since Nebraska's governor approved a new route last month. The State Department has authority over the project because it crosses an international border, but both sides on the issue expect Obama to make the final decision.