Nearly half the steel TransCanada is using is not American-made and the company won't promise to use local workers exclusively; it can't guarantee the oil will remain in the United States. To fight back, insulted Texas landowners are filing dozens of lawsuits, threatening to further delay a project that has already encountered many obstacles. 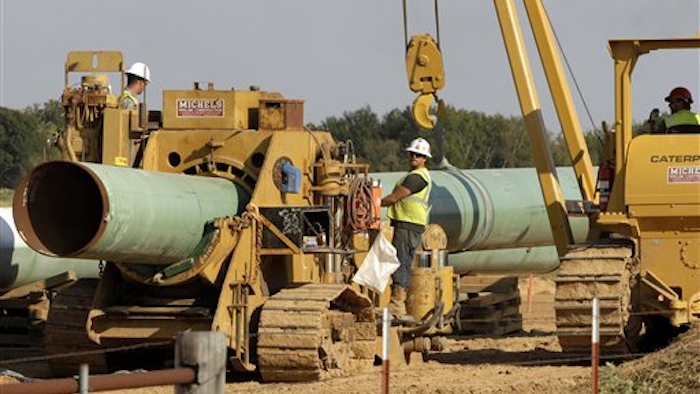 SUMNER, Texas (AP) -- Oil has long lived in harmony with farmland and cattle across the Texas landscape, a symbiosis nurtured by generations and built on an unspoken honor code that allowed agriculture to thrive while oil was extracted.

Proud Texans have long welcomed the industry because of the cash it brings to sustain agriculture, but also see its presence as part of their patriotic duty to help wean the United States off "foreign" oil. So the answer to companies that wanted to build pipelines has usually been simple: Yes.

As the company pursues construction of a controversial 1,179-mile-long cross-country pipeline meant to bring Canadian tar sands oil to South Texas refineries, it's finding opposition in the unlikeliest of places: oil-friendly Texas, a state that has more pipelines snaking through the ground than any other.

In the minds of some landowners approached by TransCanada for land, the company has broken an unspoken code.

Nearly half the steel TransCanada is using is not American-made and the company won't promise to use local workers exclusively; it can't guarantee the oil will remain in the United States. It has snatched land. Possibly most egregious: They've behaved like arrogant foreigners, unworthy of operating in Texas.

To fight back, insulted Texas landowners are filing dozens of lawsuits, threatening to further delay a project that has already encountered many obstacles. Others are allowing activists to go on their land to stage protests. Several have been arrested.

"We've fought wars for it. We stood our ground at the Alamo for it. There's a lot of reasons that Texans are very proud of their land and proud when you own land that you are the master of that land and you control that land," said Julia Trigg Crawford, who is fighting the condemnation of a parcel of her family's 650-acre Red'Arc Farm in Sumner, about 115 miles northeast of Dallas.

Oil and agriculture have lived in peace in part because a one-time payment from a pipeline company or monthly royalties from a production rig can help finance a ranch or farm that struggle today to turn a profit from agriculture. The oil giants also respected landowners' fierce Texas independence, even sometimes drilling in a different yard or rerouting a pipeline to ensure easy access to the minerals below.

TransCanada is different. For one, it has sought and received court permission to condemn land when property owners didn't agree to an easement.

"This is a foreign company," Crawford said. "Most people believe that as this product gets to the Houston area and is refined, it's probably then going to be shipped outside the United States. So if this product is not going to wind up as gasoline or diesel fuel in your vehicles or mine then what kind of energy independence is that creating for us?"

Activists have handcuffed themselves to machinery. A group has moved into a grove of trees on a TransCanada easement. A 78-year-old great-grandmother, Eleanor Fairchild, whose late husband worked in the oil industry, spent a night in jail after trespassing — along with actress Daryl Hannah of "Splash" fame — on land condemned on her 425-acre farm. On Monday, eight others were arrested for their protest activities.

TransCanada's pipeline, some landowners say, is more worrisome than those built by other companies because of the tar sands oil the company wants to transport. They point to an 800,000-gallon spill of mostly tar sands oil in Michigan's Kalamazoo River in 2010. It took Enbridge, the company that owns that pipeline, 17 hours to detect the rupture, and the cleanup is still incomplete.

With a pipeline, landowners give up control of the land for a one-time check, risking a spill that could contaminate their land or water for years. It's a risk many are willing to take in exchange for cash — to a point.

Some say the risk of a spill now is too high to cooperate. Others want guarantees TransCanada will take full responsibility for a spill.

Most pipeline projects in Texas have been completed with an average of 4 percent to 10 percent of condemned land. TransCanada, however, has condemned more than 100 of the 800 or so tracts — or about 12.5 percent — of the land it needed to complete a 485-mile portion of the pipeline that runs through Texas.

Many of the lawsuits in Texas are about TransCanada's "common carrier" status. This allows companies building projects benefiting the public to condemn private property. The Texas Supreme Court recently ruled if a landowner challenges a condemnation, the company must prove its project is for the public good.

Crawford, whose family has denied other pipelines access to their land, argues that since TransCanada's pipeline will have only one access point — or a place where oil can get into the pipe — at a hub in Cushing, Okla., it does not qualify for the status, which requires the pipeline be accessible in Texas.

"This is not about the money," said Crawford, who notes that TransCanada's final offer of $20,000 amounts to about $1 a year over 60 years, less time than her family has been on the land. "This is about the right of a landowner to control what happens on their land."

David Dodson, a TransCanada spokesman in Houston, said the company has agreements with 60,000 landowners in North America, hundreds of them in Texas. Many have been reached easily, he said. The problems in Texas, he believes, may just be a sign of the times.

"These days, anyone who attempts to build a linear infrastructure project, Texas, wherever it is, it doesn't matter, is facing increased opposition," Dodson said.

David Holland's 3,850-acre rice farm and ranch in southeast Jefferson County is littered with nearly 50 pipelines. In the five years since he was first approached by TransCanada, he said he has signed contracts with two other companies. He insists he would do the same for TransCanada — if they offered him fair value for his 10.5 acres.

Until now, Holland said, he and other landowners had given pipeline companies a roughly 20 percent discount because it was cheaper than fighting Big Oil. TransCanada offered him more than $400,000 for his land. But that, he said, was about $200 less for every 16.5 feet than he had previously received. After Holland declined, the court allowed TransCanada to take the land for $13 for every 16.5 feet — totaling slightly more than $20,000.

"Every landowner in the state is furious at them," he said.

Some landowners have reached agreements without a problem. Henry Duncan, whose 200-acre farm is across the road from the Crawford's, wouldn't say how much TransCanada paid, but feels he was fairly compensated for his 7 acres. He does wish they would use American-made steel for the pipe and hire local workers. He, too, feels they bullied landowners, but is realistic.

Pipeline money helps keep his 100 head of cattle roaming the pastures. It could help him and his wife as they age.

"To be quite honest, I'd like to see another one come through because they pay good," Duncan said.