A Southern California utility reached a nearly $120 million settlement over a massive blowout at a natural gas storage field that became the nation's largest known release of climate-changing methane and forced thousands to flee their Los Angeles homes almost three years ago. 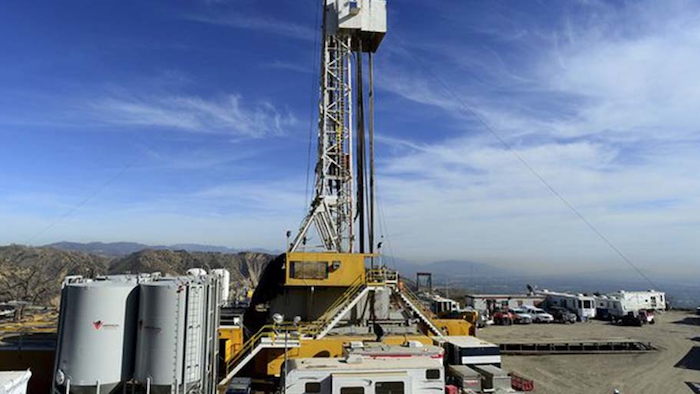 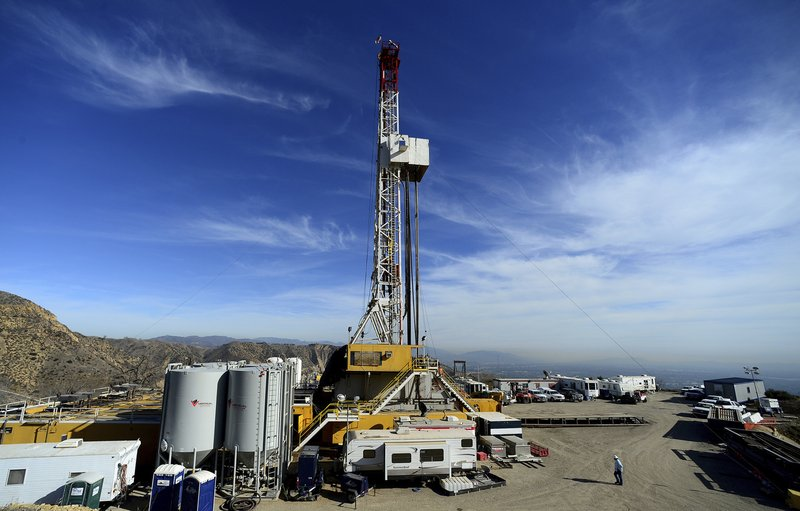 In this Dec. 9, 2015, file pool photo, crews work on a relief well at the Aliso Canyon facility above the Porter Ranch area of Los Angeles. Southern California Gas Co. said announced Wednesday, Aug. 8, 2018 that a nearly $120 million settlement has been reached in litigation stemming from a leak at a Los Angeles storage field where a massive methane release forced thousands from their homes. (Dean Musgrove /Los Angeles Daily News via AP)

The settlement between Southern California Gas Co. and state and local governments aims to mitigate the greenhouse gases that spewed uncontrollably for nearly four months. The October 2015 blowout at an Aliso Canyon well sickened residents of the San Fernando Valley and led to evacuations of 8,000 homes.

Under the settlement, the utility agreed to pay up to $25 million for a study of long-term health consequences; reimburse city, county, and state governments for responding to the blowout; monitor chemicals in the air along the boundary of the facility for eight years; and not pass costs of the settlement along to ratepayers.

"This settlement says that they have to eat all the costs," said City Councilman Mitchell Englander, who lives in the area. "During the blowout, their stock price actually went up. That was insane, and it was insulting, and I know the people that were living there were very upset about that, and they wanted it to come out of their pocket."

Attorney General Xavier Becerra said the tentative deal, which will be open to public comment and requires court approval, addressed violations of health and safety codes, the illegal discharge of air contaminants, and failure to report the release of hazardous materials.

"There is no excuse for what happened," Becerra said in a statement. "For over four months, this leak exposed our communities to natural gas emissions that resulted in adverse health impacts and disrupted the lives of tens of thousands of Californians."

In a previous settlement of criminal charges, the utility agreed to a $4 million settlement with Los Angeles prosecutors after pleading no contest to a single misdemeanor of failing to notify state authorities about the blowout soon enough.

The company, which is a subsidiary of Sempra Energy, has spent over $1 billion because of the blowout, according to a quarterly report released Monday. The majority was spent relocating families for months and reimbursing them for meals and other costs and cleaning homes. The remaining costs include legal expenses, paying for a study of the blowout's cause, efforts to cap the well, and the cost of lost gas.

The company has insurance for $1.4 billion but faces lawsuits from 30,000 people, said attorney R. Rex Parris, who represents about a third of them. He said they all are seeking $2.5 billion in damages for injuries and harm caused by the massive disruption to their lives. 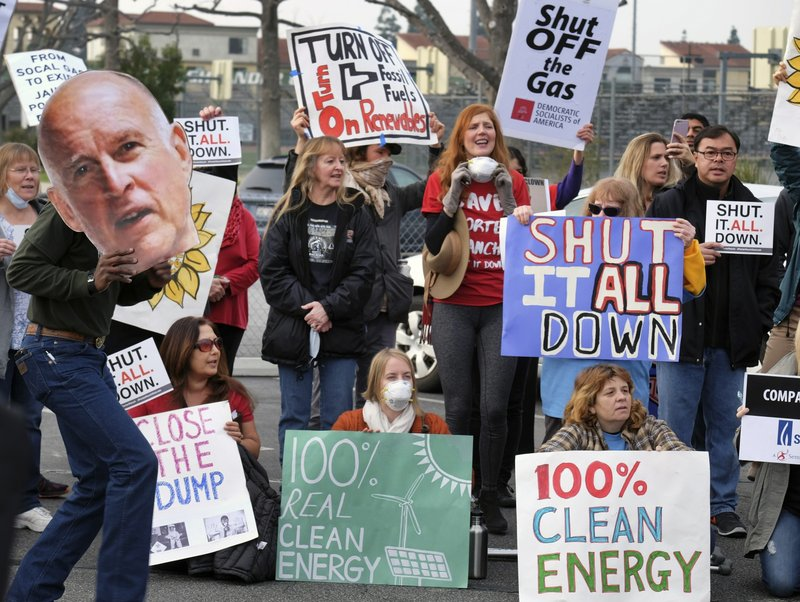 In this Jan. 16, 2016, file photo, protesters carry signs and an image of California's Gov. Jerry Brown while demanding a shut down of the Southern California Gas Company's Aliso Canyon Storage Facility near Porter Ranch in Los Angeles. A tentative settlement has been reached in litigation stemming from a leak at a Los Angeles storage field where a massive methane release forced thousands from their homes three years ago. (AP Photo/Richard Vogel)

Residents were not initially notified when gas began seeping out of the ground in the mountain-top storage field that looms above the community of Porter Ranch.

Within days, the slow leak turned into a high-pressure gusher that special crews couldn't contain. Residents began complaining of headaches, nosebleeds, and nausea.

People began moving out of the neighborhood of neat subdivisions where the film "E.T." was shot. Developments of single-family homes began to resemble ghost towns.

After the leak was capped, Southern California Gas had to meet much stricter regulations to store gas in the field, which required overhauling wells, incorporating new equipment to monitor for leaks and capping wells that didn't pass regulations. The incident led to stricter rules for other facilities statewide.

The company said in a statement that it was pleased to reach the settlement and would also hire an independent ombudsman to monitor and report on safety at the facility.

Officials noted that the settlement was only aimed at claims that state and local governments could bring and did not address the personal costs by those directly affected.

Still, those who live near the facility and want it shut down were upset the agreement didn't address their concerns.

"It does little or nothing for the victims who are still sitting on that ticking time bomb," said Matt Pakucko, who organized the group Save Porter Ranch.

Others were critical that some settlement funds would pay for projects that would not help the area affected by the blowout and could further enrich the utility. For example, $26.5 million is supposed to pay for a project to capture methane from Central Valley dairies, which would help mitigate greenhouse gases and also be used to produce energy.

"SoCalGas is unfairly benefiting from this agreement by getting over $26 million in subsidies to import gas from polluting factory farms, which it wants to use to refill Aliso Canyon, which still leaks regularly," said Alex Nagy of Food & Water Watch, an environmental group that wants the facility closed. 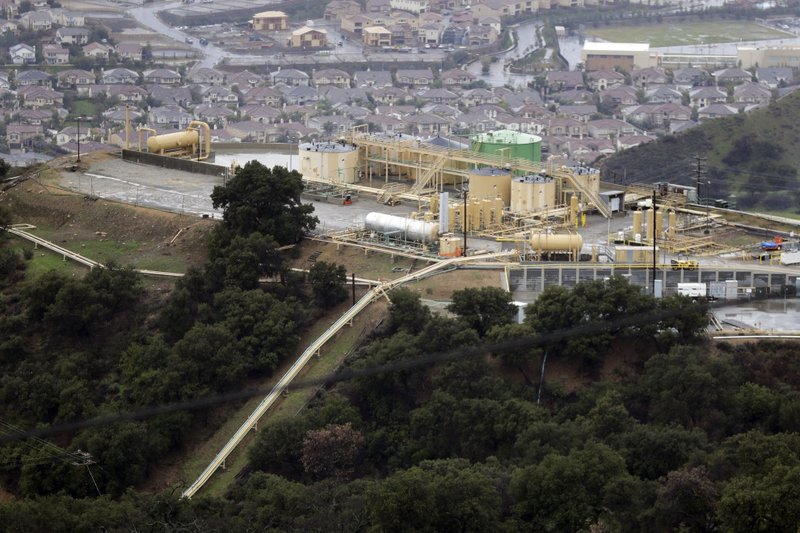 This Jan. 12, 2017 file photo shows gas gathering plant on a hilltop at the Southern California Gas Company's Aliso Canyon storage facility near the Porter Ranch neighborhood of Los Angeles. A tentative settlement has been reached in litigation stemming from a leak at a Los Angeles storage field where a massive methane release forced thousands from their homes three years ago. (AP Photo/Jae C. Hong)