A government investigation of Ohio-based Jeni's Splendid Ice Creams says there was inadequate testing and cleaning in its Columbus plant before listeria was found in some of its ice cream pints. 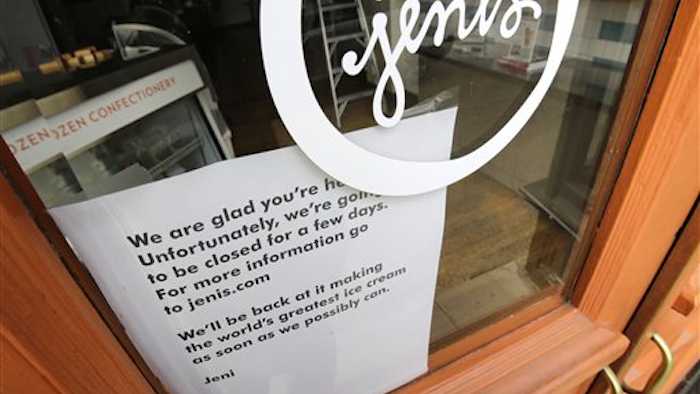 found in some of its ice cream pints.

The Food and Drug Administration released the results of its investigation into Jeni's plant on Thursday after a Freedom of Information request from The Associated Press. The report says Jeni's managers did not have an adequate sampling and testing program and were not sufficiently sanitizing some surfaces, including the floors. The report also details residue being found on some equipment.

The report said Jeni's regulatory manager and director of operations, employees responsible for assuring compliance with government food safety guidelines, showed a "lack of competency" by failing to comply with some of those guidelines. Jeni's did not have immediate comment on the report.

The company said earlier this month that it had traced the source of the listeria to a pint-filling machine in the plant. CEO John Lowe said the company will never be sure how the bacteria got into the machine, which filled a portion of the pints for retail sales, but that it will spend about $200,000 on changes to make sure it doesn't happen again. The company also said it would destroy 265 tons of ice cream worth more than $2.5 million.

Jeni's has said its ice cream will start to return to store shelves later this summer.

A 2008 inspection of Jeni's Columbus plant, results of which were also released by the FDA in response to the AP's Freedom of Information request, showed evidence of the presence of rodents and insects and inadequate personal cleanliness of employees. The 2015 investigation didn't find any of those problems.

The FDA also released results of 2009 and 2012 inspections of Blue Bell's plants in Texas and Oklahoma on Thursday. Those inspections showed some early evidence of problems at those facilities, including condensation dripping into containers before they were filled with ice cream and residue on some food receptacles.

An investigation released earlier this month showed that Blue Bell knew there was listeria in the Oklahoma plant as far back as two years ago. The FDA investigation conducted after Blue Bell was linked to the illnesses found 17 positive company tests for listeria on equipment and around the company's Oklahoma plant from March 2013 through February 2015. The FDA said it had not been notified of the listeria findings.

The agency said it isn't uncommon for companies not to report findings of listeria or other pathogens. Companies are only required to report to the FDA if they find a "reasonable probability" that a food could make people sick. Blue Bell's listeria samples were found on surfaces and not in the ice cream, and the company hadn't tested to see if the listeria strains found were among those that are the most dangerous.

Listeria generally only affects the elderly, people with compromised immune systems, and pregnant women and their newborn infants. It can cause fever, muscle aches and gastrointestinal symptoms and can be fatal. It also can cause miscarriage, stillbirth, premature labor, and serious illness or death in newborn babies.