The fire was apparently ignited by sparks from welding work at the factory's main entrance door, triggering an explosion of the chemicals used to make slippers. 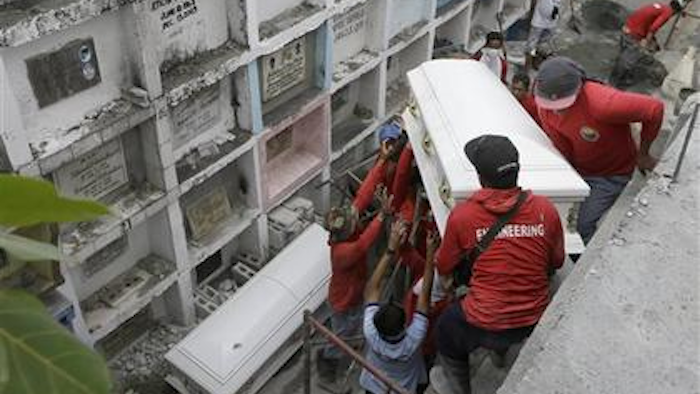 more witness reports emerged about the victims being trapped behind iron grill bars shouting for help.

The workers who died Wednesday fled to the second floor of the two-story rubber slipper factory but iron grills on windows prevented their escape, according to a relative and witnesses. A congressman said Friday that the building lacked fire sprinklers. Workers at a nearby factory told ABS-CBN television that people watched helplessly as many of the victims were begging for help from the windows as flames and black smoke engulfed the building.

At least 104 workers at the Kentex Manufacturing Corp. were recruited by an illegal sub-contractor, Labor Secretary Rosalinda Baldoz said. She said owners will be summoned to answer the charges next week.

Officials couldn't say how many workers were at the factory in Valenzuela city, a northern Manila suburb, because records were lost.

It was one of the worst fires in the country after the 1996 disco blaze that killed 162 people. Another fire at a budget hotel in 2001 killed 75.

Rep. Karlo Alexei Nograles, chairman of the Committee on Labor of the House of Representatives, said he will open an inquiry into the tragedy focusing on the occupational safety practices of the factory.

Another representative, Magtanggol Gunigundo Jr., said the building that was gutted did not have fire sprinklers.

National police Deputy Director General Leonardo Espina said they will file charges against "all those accountable and those at fault."

"Everyone has the right to work in a safe and healthy environment, regardless of the industry they are in or the type of work that they do. We can make workplaces safer by improving working conditions in factories," ILO Director-General Guy Ryder said in a statement.

Lito Ustarez, vice chairman of the left-wing May One Movement labor federation, said workers at the factory had reported that in addition to barriers on windows, which are used to prevent theft but are a violation of occupational health and safety regulations, the company also did not conduct fire drills.

Valenzuela Mayor Rex Gatchalian said the fire was apparently ignited by sparks from welding work at the factory's main entrance door, triggering an explosion of the chemicals used to make the slippers. Workers fled to the second floor where they were trapped, he said.