Two years ago, 14-year-old Maria Elena Grimmett became the youngest person ever to be published in the Journal of Environmental Quality. 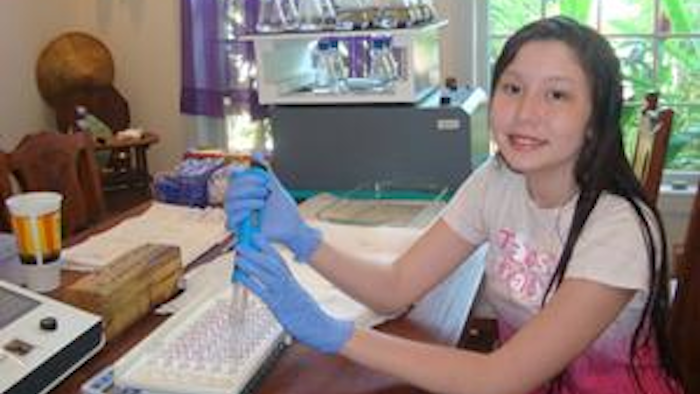 Two years ago, 14-year-old Maria Elena Grimmett became the youngest person ever to be published in the Journal of Environmental Quality.

Now aged 16, the Jupiter, Florida native is in the Journal again with a novel technique for removing pharmaceuticals and other harmful contaminants from water sources.

Grimmett experimented for years with tiny chains of plastic called polymer resins, which successfully attracted drug molecules that are often left behind by conventional water treatment procedures. Grimmett specifically found success with sulfamethazine, a common antibiotic used on livestock. She said animals only metabolize about 10 percent of the drug; the remainder eventually passes into water sources.

“It’s scary that 80 percent of rivers, streams, and groundwater in this country are contaminated by at least one organic contaminant,” Grimmett said.

The experiments, which only involved a container filled with plastic chains in the Grimmetts' garage, could be replicated at the household or even the municipal level.

Michael Grimmett credited his daughter’s determination, as well as the willingness of multiple scientists and company executives to help her along the way.

“It takes a village to raise a child,” he said. “For Maria Elena, the village was her global network with Ph.D. researchers that she contacted from published articles and forward-thinking company presidents and CEOs who believed in her.”