Hot dog makers and meat sellers say a report from the World Health Organization labeling wieners, bacon and other processed meats as cancer-causers is baloney. 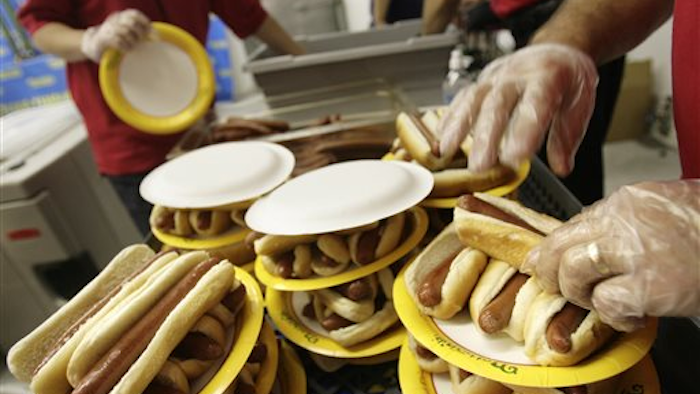 WHO said Monday that processed meats raised the risk of colon, stomach and other cancers. It also said red meat probably contributes to the disease, too.

Meat eaters at a New York food court mostly shrugged off the report Monday. And Wall Street investors seemed to do the same, with shares of meat producers little changed.

"Classifying red and processed meat as cancer 'hazards' defies both common sense and numerous studies showing no correlation between meat and cancer," the association said in a statement.

Hormel Foods, which sells Spam, sliced bacon and canned chili, said the report "did not look at the benefits of meat consumption," which it cited as including "important nutrients" and "high quality proteins."

But Hormel may also be preparing for a shift in consumers eating less processed foods. Earlier this year it paid $775 million to buy Applegate Farms, which sells organic deli meats, hot dogs and bacon, and doesn't use antibiotics, hormones, artificial ingredients or chemical preservatives.

Whether Americans will stay away from hot dogs, bacon and other meaty treats remains to be seen. Visitors at a food court in New York's Penn Station, which houses a Nathan's Famous hot dog restaurant, mostly said the WHO report won't change what they eat.

"People nowadays, they say 'I'm going to change my eating habits,' but when you're hungry and you have to grab something close by, you're going to eat there," said Randy Duran of New York.

Clevie Henry from St. Lucia said the convenience and taste of processed meat outweighs the pitfalls.