Leaders of a North Texas university town that was the first in the state to ban hydraulic fracturing repealed the voter-approved measure early Wednesday, sounding a tone of capitulation to the state's powerful oil and gas interests after a seven-month battle. 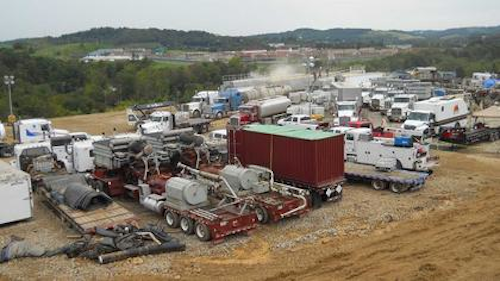 DENTON, Texas (AP) — Leaders of a North Texas university town that was the first in the state to ban hydraulic fracturing repealed the voter-approved measure early Wednesday, sounding a tone of capitulation to the state's powerful oil and gas interests after a seven-month battle.

The Denton City Council called it a "strategic repeal" that would undermine pending lawsuits filed by the Texas General Land Office and the Texas Oil and Gas Association shortly after the ban was passed.

Adam Briggle of the Frack Free Denton movement said fracking opponents are taking the fight statewide by pushing for the repeal of House Bill 40, the law Gov. Greg Abbott signed last month barring local ordinances that prevent fracking and other oil and natural gas activities harmful to the environment unless they are deemed commercially reasonable.

"Initially it was about health and safety and protecting our neighborhoods, and those continue to be our goals, but it's now also about democracy and supporting people's voices and their votes," he said.

Fracking, which involves blasting a mix of water, sand and chemicals into underground rock formations to release trapped oil and gas, has opened up vast reserves in North Texas but has also triggered concerns that the process could damage the environment and cause earthquakes.

Despite a corporate-backed campaign to quash the initiative, voters in Denton, 40 miles north of Dallas, approved the ban last November.

About 60 municipalities in Texas — the nation's biggest oil- and gas-producing state — have some form of ordinance on the books limiting drilling or fracking, according to the Texas Municipal League.

In signing the law, Abbott said he was protecting private property rights from the "heavy hand of local regulation."

Denton Mayor Chris Watts was among those who voted for the repeal, which was approved 6-1.

"It was probably one of the most difficult decisions I've had to make, to see the hard work and the heart and soul that was poured into the effort and to prevail at the ballot box, to then have a different level of government authority undo it," Watts said.