A new generation of platinum-copper catalysts that require very low concentrations of platinum in the form of individual atoms to cleanly and cheaply perform important chemical reactions is reported by Tufts University. 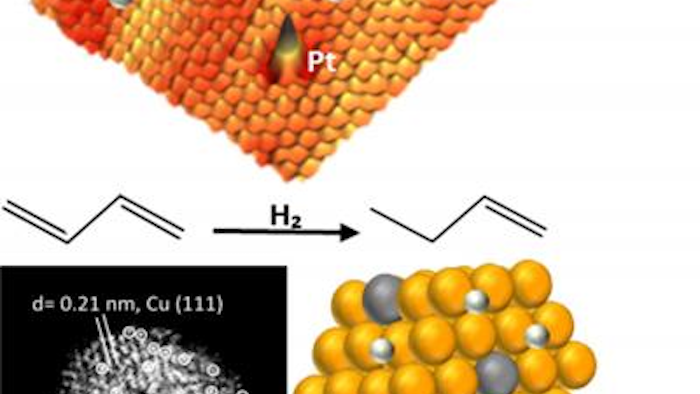 A new generation of platinum-copper catalysts that require very low concentrations of platinum in the form of individual atoms to cleanly and cheaply perform important chemical reactions is reported today by Tufts University researchers in the journal Nature Communications.

Platinum is used as a catalyst in fuel cells, in automobile converters and in the chemical industry because of its remarkable ability to facilitate a wide range of chemical reactions. However, its future potential uses are significantly limited by scarcity and cost, as well as the fact that platinum readily binds with carbon monoxide, which "poisons" the desired reactions, for example in polymer electrolyte membrane (PEM) fuel cells, which are the leading contenders for small-scale and mobile power generation not based on batteries or combustion engines.

The Tufts researchers discovered that dispersing individual, isolated platinum atoms in much less costly copper surfaces can create a highly effective and cost-efficient catalyst for the selective hydrogenation of 1,3 butadiene, a chemical produced by steam cracking of naphtha or by catalytic cracking of gas oil. Butadiene is an impurity in propene streams that must be removed from the stream through hydrogenation in order to facilitate downstream polymer production. The current industrial catalyst for butadiene hydrogenation uses palladium and silver.

Copper, while a relatively cheap metal, is not nearly as catalytically powerful as platinum, noted Professor of Chemistry Charles Sykes, Ph.D., one of the senior authors on the paper. "We wanted to find a way to improve its performance."

The researchers first conducted surface science experiments to study precisely how platinum and copper metals mix. "We were excited to find that the platinum metal dissolved in copper, just like sugar in hot coffee, all the way down to single atoms. We call such materials single atom alloys," said Sykes.

With that knowledge, Sykes and his fellow chemists turned to long-time Tufts collaborator Maria Flytzani-Stephanopoulos, Ph.D., the Robert and Marcy Haber Endowed Professor in Energy Sustainability at the School of Engineering, to determine which hydrogenation reaction would be most significant for industrial applications. The answer, she said, was butadiene.

The model catalyst performed effectively for that reaction in vacuum conditions in the laboratory, so Flytzani-Stephanopoulos's team took the study to the next level. They synthesized small quantities of realistic catalysts, such as platinum-copper single atom alloy nanoparticles supported on an alumina substrate, and then tested them under industrial pressure and temperatures.

"To our delight, these catalysts worked very well and their performance was steady for many days," said Flytzani-Stephanopoulos. "While we had previously shown that palladium would do related reactions in a closed reactor system, this work with platinum is our first demonstration of operation in a flow reactor at industrially relevant conditions. We believe this approach is also applicable to other precious metals if added as minority components in copper."

Further, the researchers found that the reaction actually became less efficient when they used more platinum, because clusters of platinum atoms have inferior selectivity compared with individual atoms. "In this case, less is more," said Flytzani-Stephanopoulos, "which is a very good thing."

Because platinum is at the center of many clean energy and green chemicals production technologies, such as fuel cells, catalytic converters, and value-added chemicals from bio-renewable feedstocks, the new, less expensive platinum-copper catalysts could facilitate broader adoption of such environmentally friendly devices and processes, she added.

The work is the latest fruit from a long cross-disciplinary partnership between Sykes and Flytzani-Stephanopoulos.

"Maria and I met more than seven years ago and talked regularly about how to combine our fairly different fields of research into an effective collaboration across the schools of Arts and Sciences and Engineering," said Sykes. "I had a state-of-the-art microscope that could see and manipulate atoms and molecules, and I wanted to use its unique capabilities to gain insight into industrially important chemical reactions. In the early 2000s, Maria's group had pioneered the single-atom approach for metals anchored on oxide supports as the exclusive active sites for the water-gas shift reaction to upgrade hydrogen streams for fuel cell use. Catalyst design know-how already existed in her lab. In retrospect, it seems obvious that combining forces would be a 'natural' development. Together we embarked on a new direction involving single atom alloys as catalysts for selective hydrogenation reactions. Our microscope was uniquely suited for characterizing the atomic composition of surfaces. We got funding from the National Science Foundation, U.S. Department of Energy and the Tufts Collaborates initiative to pursue this new area of research."

Sykes and Flytzani-Stephanopoulos have used this approach to design a variety of single atom alloy catalysts that have, in the last two years, sparked international interest.

"Traditionally catalyst development happens by trial and error and screening many materials," said Flytzani-Stephanopoulos. "In this study we took a fundamental approach to understanding the atomic scale structure and properties of single atom alloy surfaces and then applied this knowledge to develop a working catalyst. Armed with this knowledge, we are now ready to compare the stability of these single atom alloy catalysts to single atom catalysts supported on various oxide or carbon surfaces. This may give us very useful criteria for industrial catalyst design."