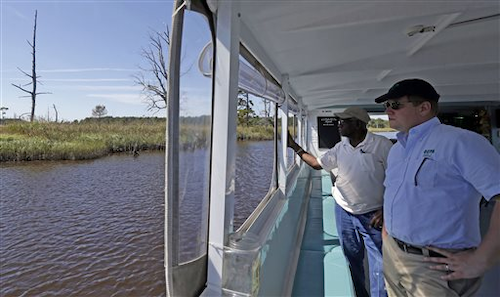 NAVASSA, N.C. (AP) — In the little town of Navassa, work has always been hard and dirty.

From antebellum rice plantations to Jim Crow-era fertilizer factories and more recently, a massive wood treatment plant, the community in the Gullah-Geechee corridor of coastal North Carolina has yielded the natural resources and back-breaking labor to make money for owners and corporations.

But the wood treatment plant left behind a poisonous legacy — creosote that soaked deep into the soil.

Now the federal government is spending $92 million from a court settlement to clean up the damage and another $23 million to restore natural resources — but some in the predominantly black town of about 1,500 mostly low-income residents question spending so much money to fix the land and not the lives of the people who live on it.

"Because right now we're concentrating on the fish and the bugs and the birds, and all of that is good, but we are concerned about the humans that have been affected by this contaminant," resident Ella Beatty said during a recent public meeting.

A wood treatment plant operated in Navassa from 1936 until 1974, applying creosote preservative to products such as railroad ties and telephone poles. According to the Environmental Protection Agency, the creosote wastewater was dumped into unlined settling ponds.

When Kerr-McGee dismantled the site in 1980, the wastewater ponds were emptied and the remaining sludge was mixed with clean soil and seeded, the EPA says.

At first, few questioned the effect of creosote on the environment, says Mayor Eulis Willis, a Navassa native born in 1948.

"All we wanted to do was get paid," he said. "We weren't concerned about that — the environmental and health impacts. Folks were trying to put bread on the table."

Creosote, listed by the EPA as a probable human carcinogen, has been found as deep as 88 feet underground at the Kerr-McGee Superfund site, according to Erik Spalvins, the EPA's project manager.

Breathing creosote vapor can irritate the respiratory tract, the Agency for Toxic Substances and Disease Registry says. Long-term air or skin exposure can blister or peel the skin. Animals fed large amounts of wood creosote had convulsions and died, while those fed lower levels had liver and kidney problems.

EPA officials say they've found no evidence that the plume of contamination has spread into the water in Navassa.

The site is being cleaned up under a $5 billion settlement of a nationwide environmental-legal case known as the Anadarko litigation, reached by the U.S. Justice Department.

But at a public meeting in August, where council members asked for local ideas on how to spend the money, residents wanted to know about the cleanup, water quality and human health — questions the environmental trustees said are outside the scope of their job.

The residents also wanted to know if they would have first dibs on cleanup and restoration jobs and if the process would be transparent.

Environmental activist Veronica Carter says corporations exploit communities such as Navassa, thinking that if they dangle a few jobs in front of poor people, they'll look the other way when the environment is threatened.

"I don't know of many towns that have less than 2,000 people and have had this many brownfield and Superfund sites," Carter said. "It would be bad enough if it was just a plain old town, but when it's primarily African-American and poor, that screams of environmental injustice," said Carter, who's on the board of directors of the N.C. Coastal Federation and is a member of the Southeastern North Carolina Environmental Justice Coalition.

Other polluted areas in Navassa include the Estech General Chemical site, where ExxonMobil continues to monitor groundwater; Holding Pond site, a former fertilizer plant; P and W Waste Oil; and the site of the former Cape Fear Meat Packing Plant, a brownfield where the EPA found minimal contamination.

Making a living in Navassa has never been easy.

Slaves once toiled there in the standing water of rice plantations. Later, their descendants — inheritors of the Gullah-Geechee culture based on farming and fishing and its unique creole language — manufactured fertilizer from tons of guano imported from the Caribbean island of Navassa, for which the town is named, said historian and author David Cecelski.

Eventually, multiple fertilizer companies located in Navassa, employing as many as 2,000 workers.

"And that legacy of dirty, dangerous work continued during the history of the fertilizer industry, and when it's gone, it seems as if it left a town that didn't have a lot of other options besides other jobs that were just as bad or nearly as bad on body and soul," Cecelski said. "It's a hard bargain."

The mayor, who wrote a book about his hometown, says most residents are "on the low end of the economic chain."

The public comment period for the restoration funds was set to expire Sept. 4, but was extended to Nov. 4 at the behest of the town, which is working with the University of North Carolina at Wilmington to come up with ideas for restoration.

When asked what the creosote-ridden marsh means to the town, Willis — a seventh-generation Navassa resident — gets emotional.

"That's our livelihood," he said. "We are the results of the rice plantations planted along the Cape Fear River — that borders the (wood treatment plant) property. ... Rice plantations produced our culture. ... We're trying to save some of that heritage."