Just two years ago, this Texas town known mostly for its annual rattlesnake roundup seemed to be on the brink of a transformation. Expecting a huge influx of oil workers, local leaders spent tens of millions of dollars to improve the courthouse, build a new law-enforcement center and upgrade the hospital. Hotels, truck stops and housing subdivisions were to follow, all catering to truck drivers and roughnecks. 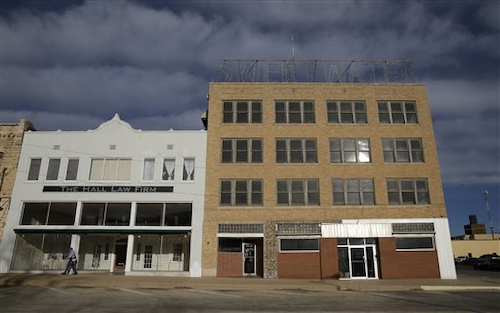 SWEETWATER, Texas — Just two years ago, this Texas town known mostly for its annual rattlesnake roundup seemed to be on the brink of a transformation.

Expecting a huge influx of oil workers, local leaders spent tens of millions of dollars to improve the courthouse, build a new law-enforcement center and upgrade the hospital. Hotels, truck stops and housing subdivisions were to follow, all catering to truck drivers and roughnecks.

Sweetwater envisioned becoming a major player in the hydraulic-fracturing boom, thanks to its location atop the Cline Shale, once estimated to be the nation's largest underground petroleum formation.

But those ambitions are fading fast as the plummeting price of oil causes investors to pull back, cutting off the projects that were supposed to pay for a bright new future. Now the town of 11,000 awaits layoffs and budget cuts and defers its dreams.

"Here we are trying to figure out: Is this a six-month problem or is it all over?" said Greg Wortham, head of the Cline Shale Alliance, a private group founded to prepare the region for the oil workers.

"Sweetwater and the Cline are like the first domino falling," said Karr Ingham, an Amarillo-based economist focused on Texas energy. "Cline Shale development and all of the marvelous benefits are in the process of being significantly interrupted."

Back in 2012, Oklahoma City-based Devon Energy triggered a flurry of leasing activity when it projected that the Cline held 30 billion barrels of oil, dwarfing both the Bakken Shale formation in North Dakota and the Eagle Ford Shale in South Texas combined.

Wortham, at the time Sweetwater's mayor, founded the alliance in the town 225 miles west of Dallas. Major projects soon began to take shape.

The county courthouse got a $4 million face-lift. A $12 million law enforcement center is nearly complete. The hospital is poised to receive $31 million in upgrades, and an extended-stay hotel is under construction.

Sweetwater and surrounding Nolan County are no strangers to the oil industry's boom-and-bust cycle. They turned to wind energy in 2001. Today, the nearby mesas have one of the world's largest wind farms, generating abundant electricity and giving local officials millions of dollars in tax revenue to put toward new development.

But no one foresaw the steep oil decline of 2014. As recently as June, the University of Texas at San Antonio projected that the Cline Shale would bring $20 billion to the region by 2022.

These days, even the biggest oil-industry boosters are nervously eyeing the partially finished hotels, truck stops and mostly vacant industrial park, wondering if they are doomed to fail.

"Growth in that area of West Texas is almost entirely tied to oil and gas. But I think the expectations that a lot of people had were inflated," UT-San Antonio economist Thomas Tunstall said, acknowledging he was among them.

Devon, the largest leaseholder in the Cline, started letting its leases expire in September. Asked whether Devon had revised its earlier projections, spokesman John Parrotto would say only that the shale "isn't a focus" for the company.

There was no mention of the Cline in Devon's third-quarter financial report filed in November with the Securities and Exchange Commission. Two months earlier, Devon's financial partner, Japan's Sumitomo Corp., took a $1.55 billion write-down on its Cline investment.

Apache Corp., the second-largest leaseholder in the Cline, also ignored the shale in its third-quarter report, despite earlier touting it as possibly the largest oil field in the nation.

"If anybody saw this as money in the bank, they were sadly mistaken," said Barclay's analyst Thomas Driscoll.

Success was never guaranteed. Drilling in the Cline is more complicated and expensive because of the depths of the formation, estimated at 10,000 feet.

Nonetheless, some of the Cline's oil explorers say they are undaunted by the falling prices.

Laredo Petroleum Corp. in Tulsa, Oklahoma, cut its overall capital expenditure budget for 2015 in half, solely focusing on its wells in the Cline.

And Sweetwater remains a busy way station for truck traffic to the Permian Basin, some 150 miles west. The BNSF Railway has invested $45 million in the Sweetwater spur that connects the West Texas oil fields to Houston refineries.

A new Sunoco pipeline snakes through Meisha Hand Adame's Sweetwater ranch past a substation, transmission lines and a cluster of wind turbines.

"The land costs much more than the income would make me farming," says 23-year-old Adame, who inherited the property in May when her father died. Without the infrastructure, "there'd be no way I could afford to keep it," she said.

Still, Chris Velez, the head bartender at Buck's Bar-B-Que in Sweetwater, worries that the restaurant's $500,000 addition will turn out to be worthless.

"The gas prices are trickling down and hitting us here," he said. Surveying the empty dance floor, he added, "Hardly anyone comes in here anymore."