It was the first time the benchmark U.S. oil contract closed at $50 or higher since March 9. 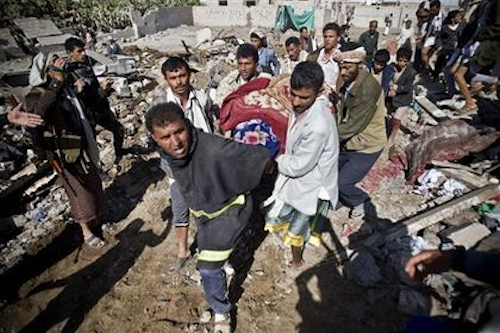 The price of oil rose sharply on Thursday as mounting tensions in Yemen got traders worried that the flow of crude from the Persian Gulf region could be disrupted.

Saudi Arabia and other Gulf states launched strikes on key military installations in Yemen. They aim to oust Shiite rebels who forced the country's embattled president to flee.

It was the first time the benchmark U.S. oil contract closed at $50 or higher since March 9. Brent crude, a benchmark for international oils used by many U.S. refineries, rose $2.71, or 4.8 percent, to close at $59.19 a barrel in London.

The price of oil has been bouncing back over the past week as concerns about tensions in the Middle East intensify. Phil Flynn, senior market analyst for the Price Futures Group, wrote in a note to clients that oil prices have "turned the corner" after the Saudi air strikes put 3.5 million barrels of oil exports at risk.

The price of oil is still down sharply from June 2014, when it traded as high as $107 a barrel. Abundant supplies and diminishing global demand were blamed for the extended slide in the price of oil.

Flynn said analysts at his group have been warning that oil was near a "major bottom" and was poised to turn higher as signs of improving demand emerge and as the number of rigs actively exploring oil and oil investment drops.

In other futures trading on the NYMEX: