The government predicts that the shale boom won't last much beyond the next decade. 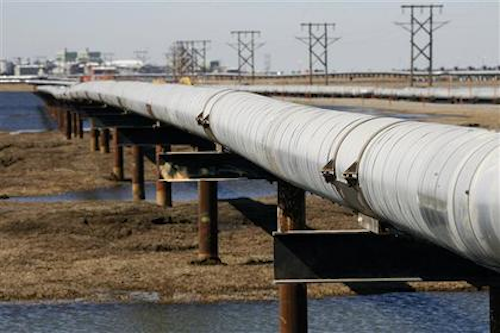 WASHINGTON (AP) — The U.S. should immediately begin a push to exploit its enormous trove of oil in the Arctic waters off of Alaska, or risk a renewed reliance on imported oil in the future, an Energy Department advisory council says in a study to be released Friday.

The U.S. has drastically cut imports and transformed itself into the world's biggest producer of oil and natural gas by tapping huge reserves in shale rock formations. But the government predicts that the shale boom won't last much beyond the next decade.

In order for the U.S. to keep domestic production high and imports low, oil companies should start probing the Artic now because it takes 10 to 30 years of preparation and drilling to bring oil to market, according to a draft of the study's executive summary obtained by the Associated Press.

"To remain globally competitive and to be positioned to provide global leadership and influence in the Arctic, the U.S. should facilitate exploration in the offshore Alaskan Arctic now," the study's authors wrote.

The study, produced by the National Petroleum Council at the request of Energy Secretary Ernest Moniz, comes at a time when many argue the world needs less oil, not more. U.S. oil storage facilities are filling up, the price of oil has collapsed from over $100 a barrel to around $50, and prices are expected to stay relatively low for years to come. At the same time, scientists say the world needs to drastically reduce the amount of fossil fuels it is burning in order to avoid catastrophic changes to the earth's climate.

The push to make the Arctic waters off of Alaska more accessible to drillers comes just as Royal Dutch Shell is poised to restart its troubled drilling program there. The company has little to show after spending years and more than $5 billion preparing for work, waiting for regulatory approval, and early-stage drilling. After assuring regulators it was prepared for the harsh conditions, one of its drill ships ran aground in heavy seas near Kodiak Island in 2012. Its drilling contractor, Noble Drilling, was convicted of violating environmental and safety rules.

Environmental advocates say the Arctic ecosystem is too fragile to risk a spill, and cleanup would be difficult or perhaps even impossible because of weather and ice.

"If there's a worse place to look for oil, I don't know what it is," says Niel Lawrence, Alaska director for the Natural Resources Defense Council. "There aren't any proven effective ways of cleaning up an oil spill in the Arctic."

But global demand for oil, which affects prices of gasoline, diesel and other fuels everywhere, is expected to rise steadily in the coming decades — even as alternative energy use blossoms — because hundreds of millions of people are rising from poverty in developing regions and buying more cars, shipping more goods, and flying in airplanes more often.

In order to meet that demand and keep prices from soaring, new sources of oil must be developed, the council argues. The Arctic is among the biggest such sources in the world and in the U.S.

The Arctic holds about a quarter of the world's undiscovered conventional oil and gas deposits, geologists estimate. While the Russian Arctic has the biggest share of oil and gas together, the U.S. and Russia are thought to have about the same amount of crude oil — 35 billion barrels. That's about 5 years' worth of U.S. consumption and 15 years of U.S. imports.

The council's study acknowledges a host of special challenges to drilling in the Arctic, including the sensitive environment, the need to respect the customs and traditions of indigenous peoples living there, harsh weather and sea ice.

But the council, which is made up of energy company executives, government officials, analysis firms and nonprofit organizations, says the technology and techniques needed to operate in the region are available now, and the industry can safely operate there. The report contends the industry has developed improved equipment and procedures to prevent a spill and clean up quickly if one occurs.

The council makes a number of suggestions designed to make U.S. Arctic development more feasible. They include holding regular sales of drilling rights, extending the amount of time drillers are allowed to work each year, and doing more scientific studies of the wildlife in the region to ensure it is disturbed as little as possible.

"It's important to have good information to make these decisions," says Jason Bordoff, director of Columbia University's Global Energy Policy. "We need to make sure we're doing this in the right way."