The exchange should result in better optimization of refineries within both Mexico and the United States, and allow for increased supply of lower-sulfur gasoline from Mexican refineries. 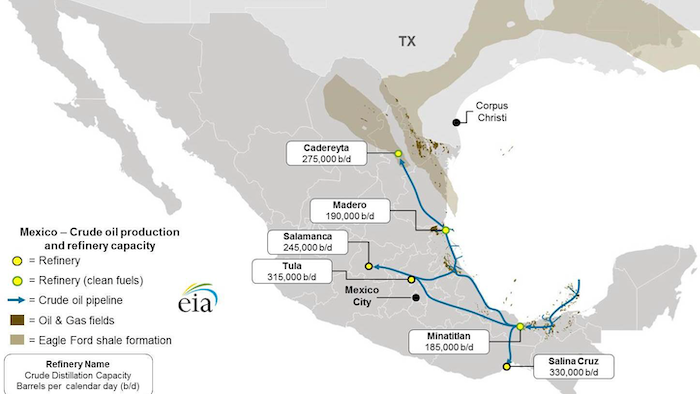 Under licenses approved earlier this month by the Bureau of Industry and Security (BIS), an office within the Department of Commerce that administers export controls on crude oil, volumes of crude oil produced in the United States and Mexico up to the approved volume cap will be exchanged. These swaps will likely involve U.S light sweet crude, such as the growing output from shale formations in the United States, and Mexican heavy sour crude.

The approved swaps are expected to be both economically and environmentally beneficial due to differences in U.S. and Mexican refineries. With significant coking and desulfurization capacity, U.S. Gulf Coast refineries are well-suited to process heavy sour crude. Conversely, part of the Mexican refinery fleet is configured to run light sweet crude. Therefore, the exchange should result in better optimization of refineries within both Mexico and the United States, and allow for increased supply of lower-sulfur gasoline from Mexican refineries.

Crude swaps are provided for in longstanding regulations governing crude oil export controls. However, no licenses for swaps had been granted until BIS’s August 14 announcement of swaps with Mexico. According to trade press, pending applications for other crude swaps involving countries in Europe and Asia were not approved.

Petróleos Mexicanos (Pemex), Mexico’s state-owned oil company, operates six refineries in Mexico with a combined crude distillation capacity of 1.54 million barrels per day (b/d) (Figure 1). Three of the refineries–Cadereyta, Madero, and Minatitlán, representing 42% of total crude distillation capacity–have coking capacity and can also produce lower-sulfur gasoline. The other refineries–Salamanca, Salina Cruz, and Tula–lack these and other upgrading units and consequently produce only limited amounts of lower-sulfur products and are not well-configured to process heavy crude oil. In 2014, the six refineries processed 1.2 million b/d of crude oil, which included 658,000 b/d of Isthmus crude, which is a medium sour crude, and 497,000 b/d of Maya, a heavy sour crude blend.

Over the past 10 years, Maya crude production has become increasingly heavier, requiring more of the lighter crudes to be blended into it to maintain Maya’s contractual specifications. EIA estimates that Maya crude now contains approximately 20% light crudes in the blend. Therefore, while Mexico’s refineries are running more light crudes, either straight or as a blend with Maya, there are still limits on their ability to produce lower-sulfur gasoline without additional capital investments.

While the full effects of crude substitution in refineries can be complex, EIA analyzed the relative product yields and the sulfur levels of the resulting products for three Mexican crude oils (Maya, Isthmus, and Olmeca) along with the same information for two grades of U.S. Eagle Ford crude oils. The Isthmus, Olmeca, and Eagle Ford (40.1 API) crudes have similar product yields, but the sulfur levels of their distillation products (in parts per million, or ppm) are dramatically different (Figure 2).

The difference in sulfur content is particularly important for naphtha, a light cut from crude oil that is blended or further refined to make motor gasoline and other products. Mexican crude naphtha cuts have a sulfur content range of 150 to 1,390 ppm, and Eagle Ford naphtha cuts range from 6 to 70 ppm (Figure 2). The substitution of Eagle Ford crude for Mexican crudes (either run straight or as part of the Maya blend) would free up sulfur removal capacity in the Mexican refining system, thereby allowing that capacity to be directed toward converting some of current higher-sulfur gasoline production into lower-sulfur gasoline. Any increased supply of lower-sulfur gasoline to Mexico’s motor gasoline market, which consumed 761,000 b/d in 2013, would result in reduced sulfur emissions and other environmental benefits.