Researchers suggest that the new substance could provide solutions in a wide variety of circumstances, from underwater ship or pipe repair to serving as an alternative to sutures during human surgery. 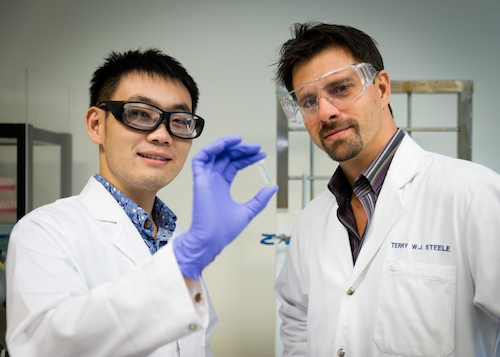 The substance, nicknamed "Voltaglue," includes carbon molecules grafted onto plastic known as dendrimers. The molecules, called carbenes, hook on to nearby surfaces when contacted by electricity.

Current superglues and epoxies require contact with air or with high heat, respectively, which makes them unsuitable for use in wet environments.

"We had to find a way to make glue which cures when we want it without being affected by the environmental conditions, so electricity was the best approach for us," said Terry Steele, an assistant professor at Nanyang Technological University who previously studied at the University of Minnesota.

Researchers, writing in the journal Nature Communications, suggested that the new substance could provide solutions in a wide variety of circumstances, from underwater ship or pipe repair to serving as an alternative to sutures during human surgery.

The hardness of the glue could also be adjusted by the length of time exposed to electricity. The NTU team hopes to improve their system to enable hardening in just a few seconds.

Meanwhile, the researchers also hope to eventually enable a way to reverse the hardening process, which could allow automakers and shipbuilders to far more easily assemble or dissemble parts. Steele secured a government grant of nearly $670,000 to advance research into reversing the process.