The ministry on Monday based its decision on the reclassification last month of glyphosate as a carcinogen by the World Health Organization's research arm. 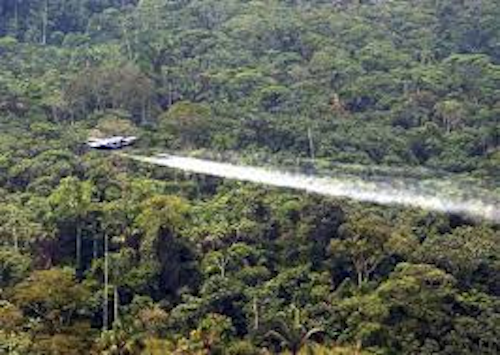 BOGOTA, Colombia (AP) — Colombia's Health Ministry is recommending the immediate suspension of aerial spraying of a herbicide that's the cornerstone of U.S.-financed efforts to wipe out cocaine crops.

The ministry on Monday based its decision on the reclassification last month of glyphosate as a carcinogen by the World Health Organization's research arm. It said it was acting in accordance with a constitutional court ruling that it take precautions whenever credible health risks are apparent.

President Juan Manuel Santos has yet to respond to the ministry's recommendation.

More than 4 million acres of land in Colombia have been sprayed with the popular weed killer over the past two decades to kill coca plants, whose leaves produce cocaine. The spraying program is partly carried out by U.S. contractors.