Just over $5 million has been spent within the past year at Toledo's drinking water plant that will allow it to quadruple the amount of chemicals needed to get rid of the toxins in the water as it is pumped from the lake. 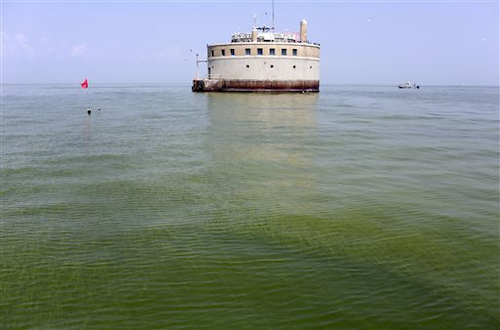 TOLEDO, Ohio (AP) — Bright yellow buoys equipped with sensors and scattered across western Lake Erie are more than beacons bobbing in the water.

They are among the first line of defense in keeping algae-produced toxins from again infiltrating the drinking water supply for those who live along the shoreline from Michigan to Ohio.

So are the charter boat captains who scoop up water samples and the flyovers by NASA that deliver high-resolution images of toxins in the lake. "We've got eyes in the sky, as well," said Tom Bridgeman, a University of Toledo researcher who monitors the algae.

It's a broad safety net designed to avoid a repeat of the water crisis in Toledo that left 400,000 people in northwestern Ohio and southeastern Michigan without safe tap water for two days early last August.

No one will guarantee that it can't happen again. But everyone — from the state's environmental chief to those who operate the city's water plant — says they are much more prepared to fight off the toxic algae.

Just over $5 million has been spent within the past year at Toledo's drinking water plant that will allow it to quadruple the amount of chemicals needed to get rid of the toxins in the water as it is pumped from the lake.

More money has gone into research and training, including emergency drills.

"We have been preparing since last summer," said Chuck Campbell, the city's water treatment supervisor. "We'll see what the lake throws at us."

Scientists forecast the western end of the lake will see one of its most severe toxic algae outbreaks in recent years after heavy rains in June washed huge amounts of algae-feeding phosphorus into the lake.

But the prediction doesn't mean there will be more drinking-water trouble because wind and water temperatures play a role, too. A year ago, the algae settled around the intake pipes where Toledo draws its water.

This time, the buoys should be able to sense when that happens and alert water plant operators in Toledo as well as other cities along the lake in both states. There also are new sensors along the water intake pipes.

Data will come in several times each hour.

"Toledo now has a way to see what's happening in the lake," said Craig Butler, director of Ohio's Environmental Protection Agency. "That's a big advantage to be able to treat the water differently if you see it coming."

The water travels from the lake through a long series of pipes before reaching the plant.

"We have three or four hours now before the water arrives at the plant to step up treatment measures," said Warren Henry, who was hired by the city to oversee short- and long-term plant upgrades.

The other big challenge, as of late, is reassuring residents that the water is safe.

There have been runs on bottled water on several occasions this summer as rumors spread about impending do-not-drink warnings that never came about.

The city has created a website with current water quality ratings and real-time data in hopes of knocking down those rumors. "We would not release the water, if it's not safe," said Toledo Mayor Paula Hicks-Hudson.