The Army uses the chamber to explode and neutralize shells containing mustard agent. 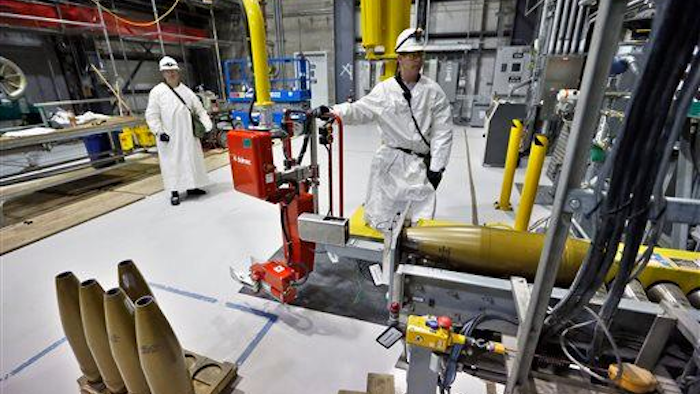 DENVER (AP) — The Army has temporarily halted the destruction of chemical weapons at a Colorado facility to repair a small dent in the door of a chamber used to blow up shells containing mustard agent.

The dent didn't allow any chemicals to escape and no one was injured, Pueblo Chemical Depot spokesman Tom Schultz said Thursday.

Crews discovered the damage Aug. 7 and repairs are underway. Schultz said operations could resume by Oct. 5.

Mustard agent can maim or kill by damaging skin, the eyes and airways.

The dent was on a surface of the door that closes against the front of the chamber to form a seal. It was about one-quarter inch wide and three-quarters inch long, Schultz said.

Officials believe the dent was caused by a metal fragment caught in the door when it was closed and locked under pressure. It was discovered when crews were cleaning out the chamber after destroying a group of shells.

The chamber will destroy only a small portion of the mustard agent at the Pueblo depot. The Crews will dismantle and neutralize most of the shells in a highly automated $4.5 billion plant nearby. The plant is expected to begin operating next year.

Shells that are damaged or otherwise unsuitable for the plant are being destroyed in the chamber. Crews place the shells inside the chamber with explosives charges, seal it and detonate the explosives remotely. Then they inject other chemicals into the chamber to neutralize the mustard.

It will take four years to destroy the entire Pueblo stockpile.

The Army stores another 523 tons of mustard and deadly nerve agents at Blue Grass Army Depot in Kentucky. Blue Grass is expected to start destroying its weapons in 2016 or 2017, finishing in 2023.