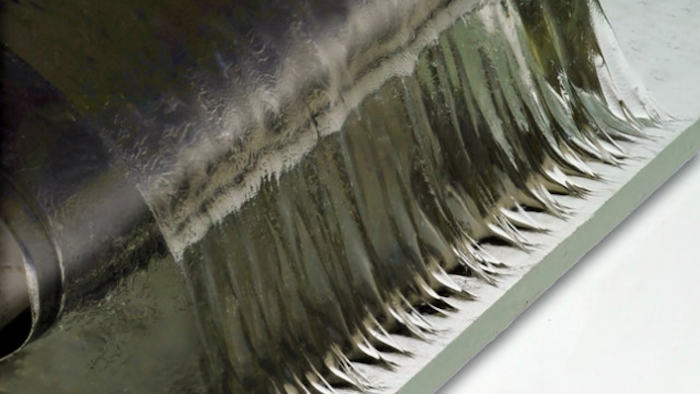 The hydrogel is more than 90 percent water but mimics extremely strong bonds that exist in nature, such as those between animal cartilage and bone or between barnacles and ship hulls.

MIT engineers, according to a study published in the journal Nature Materials, added a substance to water that dissipates energy to create a transparent, rubber-like material.

The gel is then applied to surfaces that are modified with molecules called functional silanes, which create chemical links between the surface and the gel.

The result generated a bond that mirrored the attachments of tendons and cartilage to bone — stronger than other hydrogels, elastomers, tissue adhesives and nanoparticle gels.

In lab tests, two glass panels remained glued together after the application of a 55-pound weight, while pieces of silicon remained bonded despite being smashed with a hammer.

“We basically broke a world record in bonding toughness of hydrogels, and it was inspired by nature,” said MIT graduate student and lead author Hyunwoo Yuk.

Engineers said the material could have a wide range of industrial and medical applications.

In addition to glass and silicon, the hydrogel also bonded with ceramics, aluminum and titanium. It could serve as a protective coating on underwater surfaces and might be able to conduct electricity. The gel could be particularly useful as a coating for implanted medical devices or as a synthetic tendon or cartilage. MIT researchers are currently investigating its capabilities in robotic joints.

“Instead of using conventional hinges, you can use this soft material with strong bonding to rigid materials, and it can give a robot many more degrees of freedom," said MIT mechanical engineering professor Xuanhe Zhao.