A car on a CSX train carrying a flammable and toxic substance derailed and caught fire in eastern Tennessee, prompting the evacuation of thousands within a 2-mile radius. 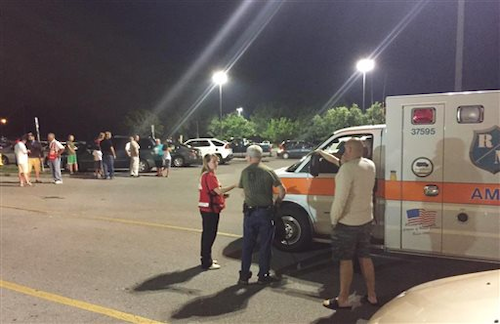 MARYVILLE, Tenn. (AP) — A car on a CSX train carrying a flammable and toxic substance derailed and caught fire in eastern Tennessee, prompting the evacuation of thousands within a 2-mile radius.

About 5,000 people in the area were being evacuated along with several businesses, Leatherwood said. Also, a manufacturing plant, Denso Manufacturing, closed down Thursday morning because of its proximity to the derailment, Easterling said.

In a statement, CSX said the train car that derailed was carrying acrylonitrile, a hazardous material used in a variety of industrial processes including making plastics. The substance is flammable and is dangerous if inhaled, CSX said.

According to the Environmental Protection Agency's website, some effects of breathing acrylonitrile include headaches, dizziness, irritability and rapid heartbeat.

Ten law enforcement officers had to be taken to the hospital because they breathed in fumes, Blount County Sheriff's Office spokeswoman Marian O'Briant said.

The train was traveling from Cincinnati to Waycross, Georgia, CSX said.

On its Facebook page, the Blount County Sheriff's Office said early Thursday that the evacuations could last from 24 to 48 hours.

A shelter for residents has been set up at a local high school. Several residents there said they weren't aware of the train derailment until they got a call or someone knocked on their door early in the morning.

Trull said he heard from a sheriff's deputy who knocked on his door.

"He just knocked on our door and told us there'd been an issue with one of the trains and they were evacuating the area," Trull said.

Brittany Parrott said she was awoken by a knock on her apartment door at about 4:30 a.m. Although she didn't hear the derailment, she could notice the effects of it as she went outside.

"You could smell it in the air," Parrott said. "I had a headache, I was feeling nauseated and lightheaded, all the symptoms."

Maryville is a town of nearly 30,000 people located about 20 miles south of Knoxville and just outside the Great Smoky Mountains National Park.