A chemistry professor at UC Davis aims to design and build new biochemical pathways within living cells, based on existing pathways from other living things. 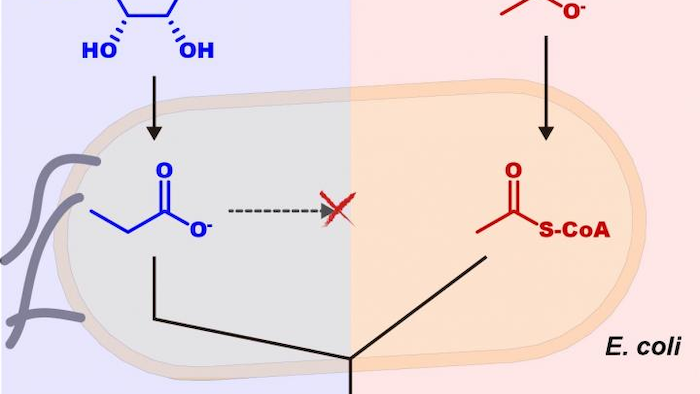 Living cells can make a vast range of products for us, but they don't always do it in the most straightforward or efficient way. Shota Atsumi, a chemistry professor at UC Davis, aims to address that through "synthetic biology:" designing and building new biochemical pathways within living cells, based on existing pathways from other living things.

In a new paper published by Nature Communications June 25, Atsumi and colleagues Yohei Toshiro and Shuchi Desai describe building a new pathway that lets the bacterium, E. coli, feed on both sugar (glucose) and acetate, a common waste material from biomass, to make isobutyl acetate. This product can be used as the basis for flavoring agents, solvents and fuels.

The original pathway starts with glucose, which is converted into both isobutanol (via a pyruvate intermediate) and into acetyl-coenzyme A, a common building block in biochemistry used for making biochemicals such as proteins, fats and alcohols, among other things. The theoretical maximum carbon yield from this pathway is 67 percent, which is lower than chemists would like to see.

Atsumi's team engineered E. coli so that they could scavenge acetate to make acetyl-CoA while using glucose to make isobutanol. The new pathway raises the theoretical maximum carbon yield of isobutyl acetate to 75 percent.

The process might be further improved by using an acetate-assimilation pathway from other soil bacteria that are better at living off acetate than E. coli, the authors note. Because acetyl-CoA is such an important material for making other biological molecules, direct acetate assimilation could have wide application in biotechnology.

The work was supported by a Hellman Fellowship.