Keystone Opponents Take To The Fields

Opponents of a proposed pipeline that would carry oil from Canada south to the Gulf Coast have stamped a massive message of resistance into a Nebraska field that is in the project's path. 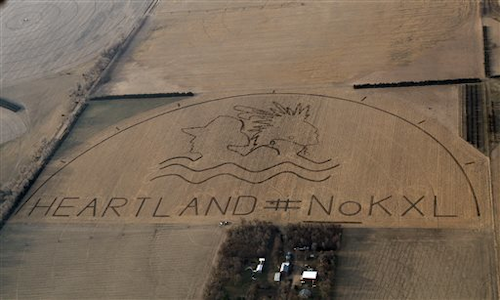 NELIGH, Neb. (AP) — Opponents of a proposed pipeline that would carry oil from Canada south to the Gulf Coast have stamped a massive message of resistance into a Nebraska field that is in the project's path.

The artwork, which covers 80 acres and was done last week, reads "Heartland#NoKXL." It is the latest protest environmentalists and landowners have employed against TransCanada's proposed Keystone XL pipeline.

Critics of the pipeline want President Barack Obama to reject the project because they fear it could contaminate groundwater and contribute to pollution.

Farmer Art Tanderup, who owns the land where the artwork was created, said he worries about the proposed pipeline because of the nature of his land.

"We have always been stewards of the land," Tanderup said. "The soil is very sandy here. Any leak would leach into the Ogallala Aquifer, contaminating our water without any concrete plan to clean up the pollution."

Tanderup drove the tractor that carved the image into dirt. It was based on a design created by artists John Quigley and Richard Vollaire.

TransCanada has said the pipeline will have upgraded safety measures, including remote control shut-off valves and frequent inspections. The company has already built and is operating the southern leg of the pipeline between Oklahoma and Texas.

More than five years have passed since TransCanada first proposed the project to complement its existing Keystone pipeline.

Last week, 11 Senate Democrats urged Obama to approve the project by the end of May, so that another construction season won't be lost.

The U.S. State Department and the president have authority over the project because it crosses a U.S. border.

The section of the project that still needs approval would cross Montana, South Dakota, Nebraska and Kansas.

TransCanada also has proposed connecting it to the Bakken oil field in Montana and North Dakota.

The company altered the pipeline's path through Nebraska to avoid the environmentally sensitive Sandhills region and a couple of towns' drinking water wells.

But a February court ruling raised questions about the status of TransCanada's proposed route through Nebraska because a judge invalidated the law state officials followed when they approved the route. That court ruling has been appealed, and the company says that means the route remains valid until the appeal is decided.