The Heat Is On Sriracha

A small Southern California town has turned up the heat on the makers of the wildly popular Sriracha hot sauce, telling them that if they can't keep their bottling plant from smelling up the neighborhood, the city will. 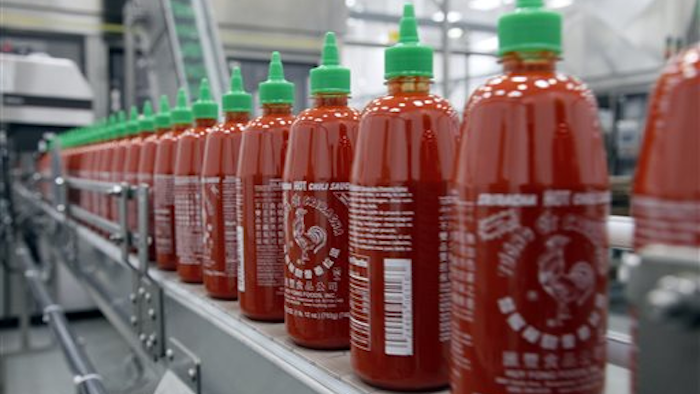 LOS ANGELES (AP) — A small Southern California town has turned up the heat on the makers of the wildly popular Sriracha hot sauce, telling them that if they can't keep their bottling plant from smelling up the neighborhood, the city will.

The Irwindale City Council voted 4-0 Wednesday to tentatively declare Huy Fong's 2-year-old bottling plant a public nuisance. If a second vote, scheduled for April 23, makes the declaration official, Huy Fong will have 90 days to stop releasing the spicy smells that neighbors say burn their eyes and throats and make them sneeze and cough.

If the smells still persist, the Los Angeles suburb says it will have the authority to enter the plant, take whatever measures are necessary to kill the odor, and bill the company for its efforts.

Reaction to the move was swift and heated.

State Sen. Ed Hernandez, who represents the area, advised Irwindale to cool it, saying if the city of 1,400 residents doesn't want the maker of arguably the world's most popular hot sauce, he's sure there are several other cities in his district that do.

"I ask that the city of Irwindale reject this inflammatory and unnecessary public nuisance designation and work constructively with Huy Fong Foods to resolve these issues," he said in a statement.

The company's attorney, John Tate, complained the vote was akin to "thumbing Huy Fong in the eye," since it came after he told the city that Huy Fong was working with regional air-quality officials on a plan to make the smell go away by June 1.

Irwindale City Manager John Davidson said officials were delighted to hear that, indicating he's certain everybody will simmer down once they realize the city wants only the smell, and not the company, to go away.

"Obviously this is a council that wants to work with all local businesses regardless of their size, and has never had any interest in having Huy Fong Foods shut down or relocating," he said.

Davidson said city officials plan to work with the company and air-quality officials to ensure Huy Fong can get a filtration system in place that will make everyone happy.

The company opened its $40 million bottling plant in Irwindale after it outgrew its old one in nearby Rosemead.

The city says most of the complaints about pungent, spicy smells have come during the last two harvest seasons when as many as 100 million pounds of freshly harvested, red-hot jalapeno peppers were ground between August and October.

Davidson said 30 to 35 people have given the city sworn statements that the smell bothers them. A couple told city officials the smell made them ill enough that they saw their doctors.

Privately held Huy Fong Foods was founded and is still owned by Vietnamese immigrant David Tran. He began making the fiery sauce in a bucket at his home in 1980 and saw his business take off from there.

Originally a staple in Asian restaurants and homes, Huy Fong's Sriracha sauce, in its distinctive green-tipped bottles with the rooster on the logo, has spread across all cultures, with people putting it on their hot dogs, tacos, pizza and other foods.