The owner of a tugboat that collided with a ship last month, dumping nearly 170,000 gallons of oil into the Houston Ship Channel, claims in court filings the ship was speeding and being operated in a reckless manner. 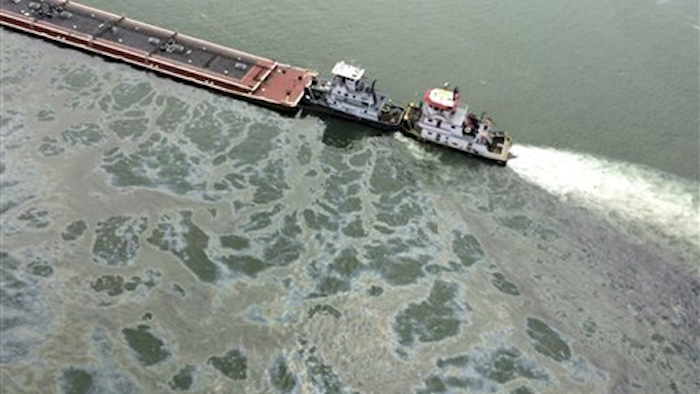 HOUSTON (AP) — The owner of a tugboat that collided with a ship last month, dumping nearly 170,000 gallons of oil into the Houston Ship Channel, claims in court filings the ship was speeding and being operated in a reckless manner.

Houston-based Kirby Inland Marine alleges in court documents filed earlier this month that the March 22 collision, which occurred after the ship struck a barge the tugboat had been pulling, was caused by gross negligence on the part of the ship's owner, Sea Galaxy Marine based in Liberia in West Africa. In its own court filings, Sea Galaxy says the collision was not its fault.

The U.S. Coast Guard, which is still investigating the cause of the accident, did not immediately return a call Thursday seeking comment on the claims being made by the companies.

Two barges that were being pulled by the Kirby Inland-owned tugboat Miss Susan had been leaving Texas City and heading for the Intracoastal Waterway while a Sea Galaxy-owned inbound ship, the Summer Wind, was traveling through the Houston Ship Channel. The collision happened when the barges made a left turn to enter the Intracoastal Waterway and were crossing the ship channel.

But Kirby Inland alleged in court documents filed earlier this month that the tugboat had broadcast its position to let all vessels in the vicinity know its position. At the time, the Houston Ship Channel was under a fog advisory.

"While the Summer Wind knew of the Miss Susan's position, at no time did it attempt to adjust its speed or heading to avoid the vessel," Kirby Inland said in its April 8 court filing. "The collision occurred, among other reasons, due to the Summer Wind's excessive, unreasonable speed."

Kirby Inland alleges the collision "was solely and proximately caused by the fault ... and gross negligence of (Sea Galaxy Marine), and/or by the dangerous or unseaworthy condition of the Summer Wind."

Kirby Inland is seeking more than $10 million in losses from Sea Galaxy. Matt Woodruff, a Kirby Inland spokesman, declined comment Thursday due to the ongoing investigation.

An attorney for Sea Galaxy, Kevin P. Walters, also declined comment because of the investigation. He said Sea Galaxy intends to respond to Kirby Inland's allegations in future court filings.

The current court filings are part of lawsuits that have been filed against both Kirby Inland and Sea Galaxy by fishermen, business owners and others who are claiming to have suffered economic losses due to the oil spill and the shutdown of ship channel and surrounding waterways, which lasted several days. The ship channel is the main artery linking the area's busy ports with the largest petrochemical complex in the country.

In its own court filings, Sea Galaxy described its Summer Wind ship "in all respects seaworthy," and said it was "staunch, strong, properly and sufficiently manned."

The company said the loss and damage from the collision "were not caused or contributed to in any way by the fault, negligence or lack of due care on the part of ... Sea Galaxy."

Sea Galaxy has filed a petition asking that it be found not liable for injuries or damages, or that its liability be limited to the value of the ship, about $9.3 million.

The Coast Guard has said that cleanup from the oil spill, which spread into the Gulf of Mexico and southward along the Texas coast, is wrapping up.