A moment of silence at 7:51 p.m. marked the exact time of the leveling blast in a town that is recovering but still has a long way to go. Photos of the 15 victims were shown on a large screen, including one of the several volunteer firefighters killed. 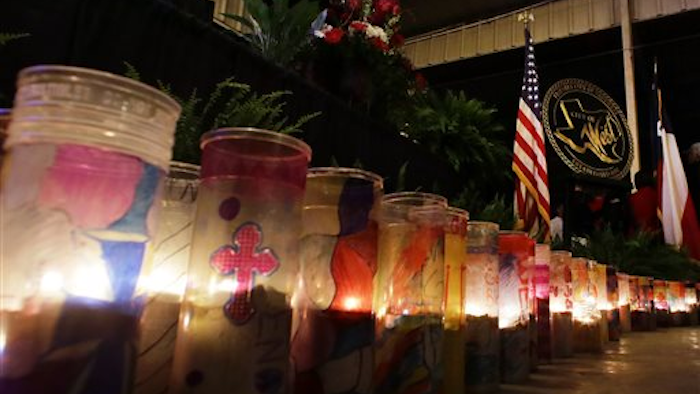 WEST, Texas (AP) — Rev. Terry McElrath heard the deafening boom. The pastor spun around and saw a column of smoke billowing into the sky above his small Texas town. He immediately thought, "Somebody has died tonight."

A spiraling fire inside the fertilizer plant in West had ignited 34 tons of ammonium nitrate, creating an explosion so powerful that it killed 15 people, leveled nearby homes and schools, and left a crater where West Fertilizer Co. once stood. Debris was strewn miles away.

"It's hard to believe that in one moment, so much damage could be done," McElrath told hundreds of people crowded in a pavilion at the local fairgrounds Thursday night, the one-year anniversary of the explosion.

A moment of silence at 7:51 p.m. marked the exact time of the leveling blast in a town that is recovering but still has a long way to go. Photos of the 15 victims were shown on a large screen, including Joey Pustejovsky, a 29-year-old married father who was among several volunteer firefighters killed.

"I called one of the firefighters at 2 a.m. that night. I said, 'Tell me, I want to know.' And he did," his brother, Brad Pustejovsky, recalled Thursday night. He told his father, and they decided not to tell his brother's wife and their mother for about three days, "but I knew," he said.

Yet soon after, Joey Pustejovsky's son, who was only 4 ½ years old at the time, raised $83,000 by selling hotdogs to build a park honoring his father.

Organizers were hoping to focus on those kinds of efforts Thursday, honoring the past but looking to the future. The ceremony featured a choir singing "Amazing Grace" on a stage decorated with ferns and flickering candles on which middle school students scrawled messages such as "Rise Up, West" and "Pray for West."

West was settled by Czech immigrants more than a century ago, and some of their grandchildren and great-grandchildren still call the town home. Its Czech bakeries are well-known among drivers on Interstate 35 between Dallas and Austin.

The signs of the town's physical progress are obvious: Gone are the dozens of wrecked homes with tongue-in-cheek "For Sale!" messages spray-painted on their walls, and about 70 homes are finished or in the process of construction. Two new replacement schools and a nursing home will soon be built.

But residents are clear-eyed about the challenges ahead.

Payments from the city's long-term recovery fund, which received about $3.6 million in donations, have been delayed as organizers deal with unforeseen paperwork and federal regulations. The city's go-to person for that sort of work was the city secretary, Joey Pustejovsky.

West Mayor Tommy Muska said he's closely watching the emotional toll the blast has taken on the city's 2,800 residents, especially for some of the more than 200 people hurt in the blast who are still recovering.

Muska said Thursday afternoon that the town was considering rebuilding the plant, noting it was central to West's economy — but he acknowledged it was a highly controversial idea. He also said he was negotiating with a flag manufacturer and a recycling company to set up operations in West.

Holly Harris, whose husband, Dallas Fire-Rescue Capt. Kenneth Luckey Harris, died in the explosion, is among local residents who say they have chosen to push forward. They don't want to dwell on unanswered questions, such as what sparked the fire or what firefighters knew going in — or what could have been done to prevent it.

"It's just a choice that we've made that we're not going to be sad," she said before Thursday's ceremony. "I mean, we are sad at times, but we're going to try to make everything a happy situation and try to get on with our lives."