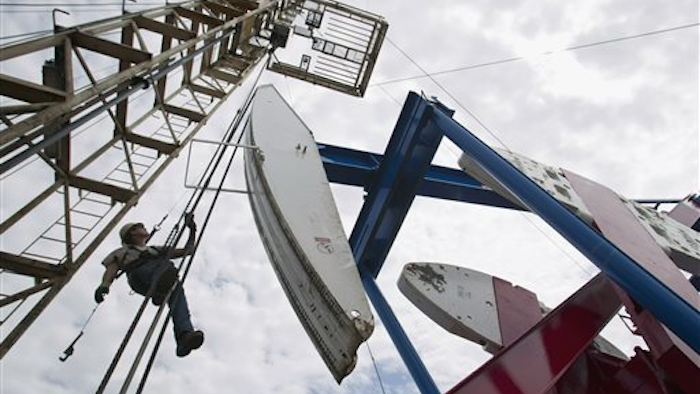 Drillers first targeted the Bakken in Montana in 2000 and moved into North Dakota about five years later using advanced horizontal drilling and hydraulic fracturing techniques to recover oil trapped in a thin layer of dense rock nearly two miles beneath the surface.

Oklahoma City-based Continental Resources Inc., one the oldest and biggest operators in the Bakken, said two-thirds of the production has come in the past three years.

"It's been quite a revelation that's happened there," Continental Chairman Harold Hamm told The Associated Press. "It's right in line with expectations."

Hamm, an early believer in the Bakken, estimated the rich cache holds more than 20 billion barrels of oil and technology continues to improve to help recover it.

"This is tight rock and it's quite a job to wring barrels out of it," he said.

Experts had known for decades that the Bakken held millions of barrels of crude, but it wasn't until oil prices reached record levels that the technology was developed to the point of being able to exploit the formation.

The Bakken encompasses some 25,000 square miles in North Dakota, Montana, Saskatchewan and Manitoba. About two-thirds of the acreage is in western North Dakota.

Unlocking the once-perplexing formation has propelled North Dakota from the nation's ninth-largest oil producer in 2006 to No. 2, behind Texas.

The Bakken and the Three Forks formation directly below it account for about 94 percent of North Dakota's current oil production, which is nearing 1 million barrels a day, said Alison Ritter, a North Dakota Department of Mineral Resources spokeswoman. Three Forks production is counted toward Bakken production.

Ron Ness, president of the North Dakota Petroleum Council, said the milestone of a billion barrels of oil is less important than the Bakken's economic impact on the region.

"Barrels are just barrels," said Ness, whose group represents more than 500 companies working in North Dakota's oil patch. "It's that long-term investment that's important. The Bakken has been a huge asset to the state, the region and the nation."

Jim Halvorson, a petroleum geologist with the Montana Board of Oil and Gas, said his state has produced 1.8 billion barrels of oil since 1916.

The U.S. Geological Survey has called the Bakken the largest continuous oil accumulation it had ever assessed. The agency, which bases its data largely on information from oil company and state drilling records, said up to 7.4 billion barrels of oil could be recovered from the Bakken and the underlying Three Forks using current technology.

Geologists and oil companies have mixed opinions on whether the Three Forks is a separate formation or acts as a trap, catching oil that leaks from the Bakken shale above. Some say it could be a combination of both.

To capture crude from the formations, companies drill down nearly two miles then angle the well sideways for about another two to three miles. A pressurized concoction of water, chemicals and grit is injected to break open oil-bearing rock, which allows the oil to flow to the well.

That technique, known as hydraulic fracturing or fracking, has been blamed for endangering water quality in some states. North Dakota regulators say the state's water sources are protected by thousands of feet of geologic formations atop fracturing operations.