Ohio's governor is promising an extensive review of how the water supply for 400,000 people in Ohio and Michigan became tainted with a toxin over the weekend while a high-ranking state lawmaker is planning hearings on the blooms of algae fouling Lake Erie. 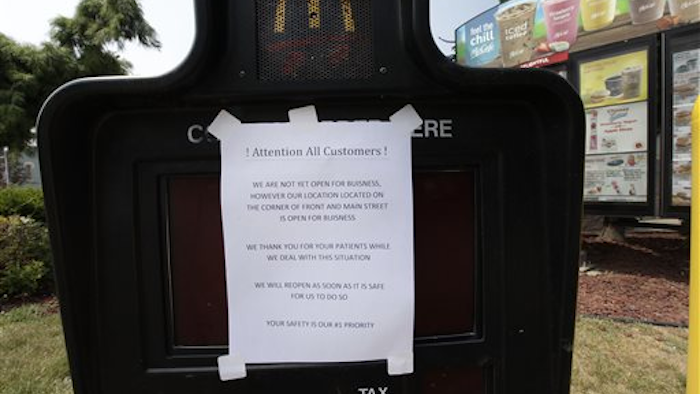 TOLEDO, Ohio (AP) — Ohio's governor is promising an extensive review of how the water supply for 400,000 people in Ohio and Michigan became tainted with a toxin over the weekend while a high-ranking state lawmaker is planning hearings on the blooms of algae fouling Lake Erie.

The water problems that led to a state emergency in Ohio's fourth-largest city and forced thousands to avoid drinking tap water for more than two days is certain to come under intense scrutiny in the coming months.

"This is not just one community issue, this is the whole lake," said state Rep. Dave Hall, who wants to bring in experts to look at the cause of the blooms and how they're influenced by weather, farm runoff, manure management and wastewater treatment facilities.

Hall, chairman of the Ohio House Agriculture and Natural Resources Committee, said he wants a hearing to explore ways to mitigate or treat the algae.

"I don't think you're going to change things overnight," Hall said. "There's not a silver bullet because I think there have been practices that have been in place for years that's caused us to get to this point."

Gov. John Kasich told The Associated Press it's not clear yet whether the algae bloom centered where Toledo draws its water was entirely to blame for fouling the city's drinking water or if changes also are needed with the water-supply system.

The state, he said, will conduct a review of what happened, including taking a look at Toledo's aging water system and continuing to figure out how to reduce pollution that feeds algae in the western end of the lake.

The state's Environmental Protection Agency, according to Kasich, also will be looking at setting rules on how often the water should be tested — something that isn't in place now.

The weekend warning had led Kasich to declare a state of emergency in three counties, bringing in soldiers from the Ohio National Guard to deliver bottled water and operate purification systems to produce drinkable water.

Ohio's Republican Sen. Rob Portman, who was behind a bill that will bring more money for monitoring the algae in the Great Lakes, said more research is needed to understand what's behind the blooms and how to control them.

After the ban was lifted in Toledo, city officials recommended that residents who had not used their water since Saturday flush out their systems. They asked people not to water lawns or wash cars at the risk of overwhelming the system.

Some weren't ready to drink the tap water just yet.

"I'm waiting for two or three days," said Aretha Howard, of Toledo. "I have a pregnant daughter at home. She can't drink this water."