Thousands of older rail tank cars that carry crude oil would be phased out within two years under regulations proposed Wednesday in response to a series of fiery train crashes over the past year, including a runaway oil train that exploded in the Quebec town of Lac-Megantic, killing 47 people. 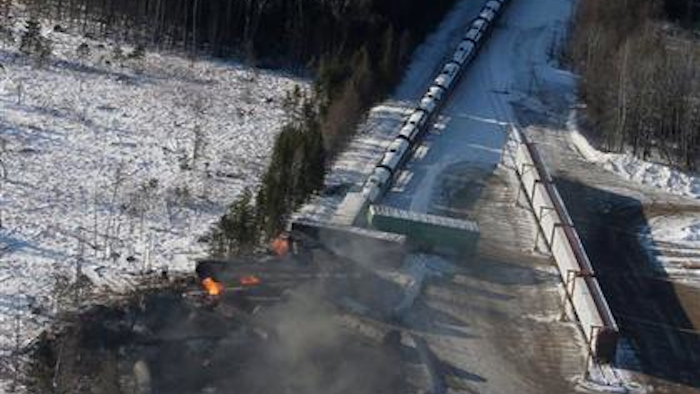 WASHINGTON (AP) — Thousands of older rail tank cars that carry crude oil would be phased out within two years under regulations proposed Wednesday in response to a series of fiery train crashes over the past year, including a runaway oil train that exploded in the Quebec town of Lac-Megantic, killing 47 people.

Accident investigators have complained for decades that the cars are too easily punctured or ruptured, spilling their contents, when derailed.

The phase-in period for replacing or retrofitting the DOT-111 tank cars is shorter than the Canadian government's three-year phased plan. However, regulators left open the question of what kind of tank car will replace the old ones, saying they will choose later from among several proposals.

Besides oil, the proposed regulations would also apply to the transport of ethanol and other hazardous liquids. The regulations also apply only to trains of 20 or more cars, which would include most oil shipments.

The proposal also makes mandatory a 40-mph speed limit through urban areas that freight railroads had voluntarily agreed to earlier this year. Tank cars have ruptured in several accidents at speeds as low as 24 mph. Regulators said they're considering lowering the speed limit to 30 mph for trains that aren't equipped with more advanced braking systems.

The freight railroad industry had met privately with department and the White House officials to lobby for keeping the speed limit at 40 mph rather than lowering it. Railroad officials said a 30 mph speed limit would tie up traffic across the country because other freight wouldn't be able to get past slower oil trains, which are often 100 cars or longer.

Transportation Secretary Anthony Foxx also said the government's testing of crude oil from the Bakken region of North Dakota and Montana shows the oil is on the high end of a range of volatility compared with other crude oils, meaning it's more likely to ignite if spilled.