Official: Gas Spill Has Had no Impact on Water so Far

There has been little impact to the water supply so far from a ruptured pipeline during a freak storm in Pennsylvania that sent nearly 55,000 gallons of gasoline into a creek tributary. 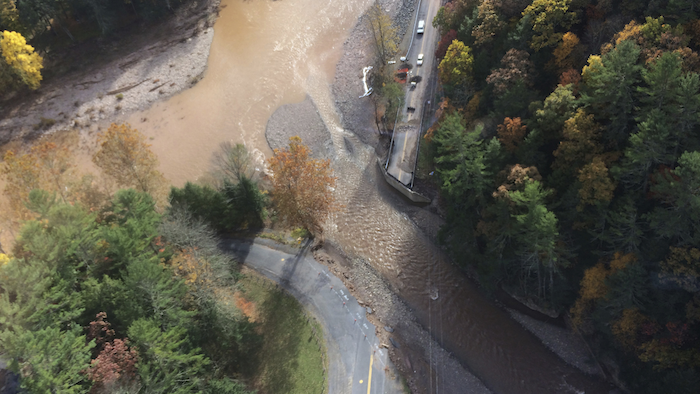 WILLIAMSPORT, Pa. (AP) — There has been little impact to the water supply so far from a ruptured pipeline during a freak storm in Pennsylvania that sent nearly 55,000 gallons of gasoline into a creek tributary, officials said Saturday.

But authorities are continuing to monitor the water supplies that serve thousands of residents around Williamsport.

A storm late Thursday into Friday dumped up to 7 inches of rain on areas in western and central Pennsylvania, triggering mudslides, turning roads into rivers and sweeping away at least two homes. Hundreds more were damaged in Centre County, home to Penn State's main campus. One man was killed when a tree crashed into his home.

The flooding caused an 8-inch Sunoco Logistics pipeline that carries gasoline, diesel and home heating oil to rupture, spilling an estimated 54,600 gallons of gasoline into a tributary of the Loyalsock Creek. The creek runs into the west branch of the Susquehanna River, but the company said Saturday that "no petroleum-related compounds" had been detected in the river.

"We don't have any indication that water supplies have been affected at this point, but we'll continue to monitor that," said Sunoco Logistics spokesman Jeff Shields, who said the company was working with state and federal environmental departments.

Crews have deployed skimmers to try to pick up gasoline from the surface of the water and booms to contain and absorb it.

"But we really haven't found much of the product so far," he said. "There was a lot of water that came down that night."

Crews are waiting for the water to recede and expose the pipe so they can access it and formulate a repair plan, he said. A bridge at the site of the spill was completely washed out. The exact cause of the release is under investigation.

Air quality is also being monitored, and no hazardous levels have been detected "although gasoline odors remain in certain areas," Shields said.

"One side of town, State College and its northern and western developments, had 7 to 8 inches ... while the southern end of town down into Boalsburg to the southeast barely had an inch," he said.

The (Lock Haven) Express reported a popular retired teacher was killed Thursday night in Clinton County when a tree crashed into his home. The man had been on the second floor and was tossed from his home by the impact, landing on his back in the driveway.

About 100 residents were forced from their homes in the Bald Eagle Valley, including about three dozen residents of a personal care home, Centre County Commissioner Steven Dershem said.

At least one bridge across the Loyalsock Creek in Montoursville was wiped out, according to Ruth Miller, spokeswoman for the Pennsylvania Emergency Management Agency.