Colorado health officials said it's highly likely that trace amounts of toxic chemicals found in three drinking water systems came from firefighting foam used at a nearby Air Force base. 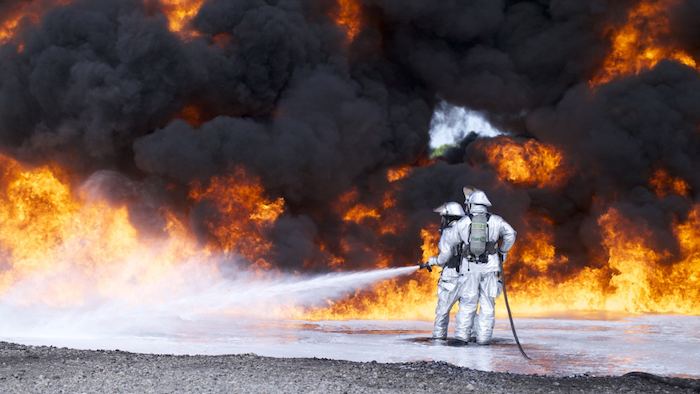 The state Department of Public Health and Environment said Wednesday it hasn't ruled out additional sources, but officials believe at least some of the chemicals came from Peterson Air Force Base, where firefighters used the foam in training exercises.

The foam contained perfluorinated compounds, or PFCs, which have been linked to prostate, kidney and testicular cancer, along with other illnesses.

The comments by state officials were the most definitive statement to date linking the contamination to Peterson. It came hours after the military released a report identifying six sites at the base where the foam may have escaped into the environment after firefighting drills or fire equipment tests.

They include hangars, fire stations, a drainage pond and a field where the base once sent storm runoff. The field is now a golf course and is irrigated from the drainage pond.

The military is checking bases nationwide for possible releases of the foam into the environment.

Colorado and Air Force officials will meet next week to discuss their next steps, said Roland Clubb of the state health department. The next phase will include drilling monitoring wells and taking soil samples, which the Air Force announced last month.

Clubb said state officials also want assurances from the Air Force about seven other sites at Peterson where the foam was used, but where the military said no follow-up investigation is needed. The Air Force said any foam released at those sites went through a treatment system.

PFCs also were widely used in non-stick coatings on cookware and in other applications. The U.S. Environmental Protection Agency ordered water systems nationwide to test for the compounds between 2013 and 2015.

In Colorado, PFCs were found in well water in three utility systems serving about 69,000 people in the city of Fountain and an unincorporated community called Security-Widefield. The levels exceeded the EPA's suggested limits.

Colorado health officials have said the communities have higher rates of kidney cancer than surrounding populations, but the evidence was not sufficient to definitively blame PFCs. They noted that the residents also have higher rates of obesity and smoking, which are linked to cancer.

PFCs didn't show up in other public Colorado water systems, but health officials in El Paso County, which includes the affected towns, said they found PFCs above the EPA recommendation in 26 private drinking-water wells. They were awaiting results on 12 others.

Aaron Doussett, manager of the county's water quality program, said he doesn't have enough information yet to say whether the PFCs came from the air base.

The Security Water District has shifted almost entirely to surface water — from rivers and lakes — since the PFCs were found, Manager Roy Heald said Wednesday. Previously, about half the district's water came from wells and half from surface water.

Heald expects the district to soon use surface water entirely, after modifications to the system.

The Fountain Water Department has not used wells since October and got through this summer's peak demand period entirely on surface water, Utilities Director Curtis Mitchell said.

The director of the Widefield water system wasn't immediately available to comment, his staff said.