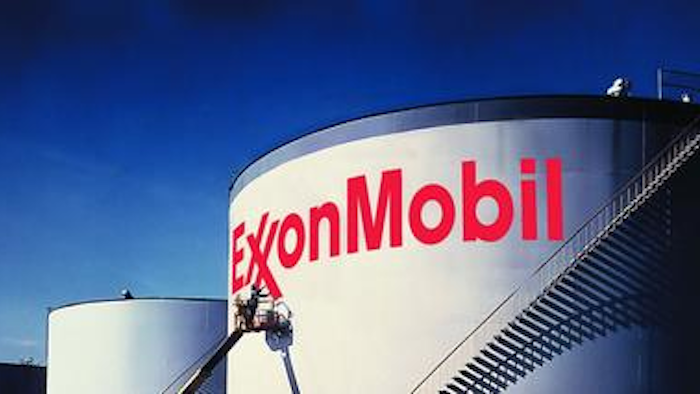 Exxon still earned $1.7 billion in the second quarter. It was, however, down 59 percent from a year ago, and per share income missed Wall Street expectations.

The energy giant cited lower prices for oil and gas and weaker margins from its refining operations.

The company is cutting exploration spending to manage through the lower prices.

Exxon shares had climbed nearly 30 percent since late January as crude prices rallied from a deep slump. But more recently oil prices have fallen back due to high inventories and the continued sluggish global economy — this week, U.S. oil hit a three-month low, and Exxon shares lost 4 percent through Thursday's close.

While oil companies are seeing profits shrink, consumers are enjoying the benefit of cheaper energy. The average U.S. price for a gallon of regular gasoline stood at $2.14 on Friday, the lowest price since April, according to auto club AAA.

Gasoline prices are skidding because of high inventories. The decline in pump prices defies the usual pattern of higher prices during summer, when people drive more. Motorists are filling up on the cheapest July gasoline in 12 years, the auto club says.

Exxon's net income was lower than the $1.8 billion it earned in the first quarter and the Texas-based company's smallest profit since the third quarter of 1999, when it earned $1.5 billion.

The profit equaled 41 cents per share, well below the 64 cents per share forecast from 21 analysts surveyed by FactSet. Exxon did not exclude any one-time costs from the per share calculation.

Exxons production of oil and gas was nearly unchanged, but the comnpany's capital and exploration spending tumbled 38 percent from a year earlier, to $5.2 billion.

Eventually, analysts say, that kind of lower spending by Exxon and its rivals will translate into lower production, smaller supplies and higher prices for oil.

In recent weeks, Exxon announced a major oil discovery off the coast of South America and announced it would pay $2.5 billion for InterOil Corp., a deal designed to grab more of Asias growing demand for natural gas.