The Standing Rock Sioux Tribe is suing federal regulators for approving part of a $3.8 billion oil pipeline between North Dakota and Illinois that would be the biggest-capacity pipeline yet carrying oil out of the state's oil patch. 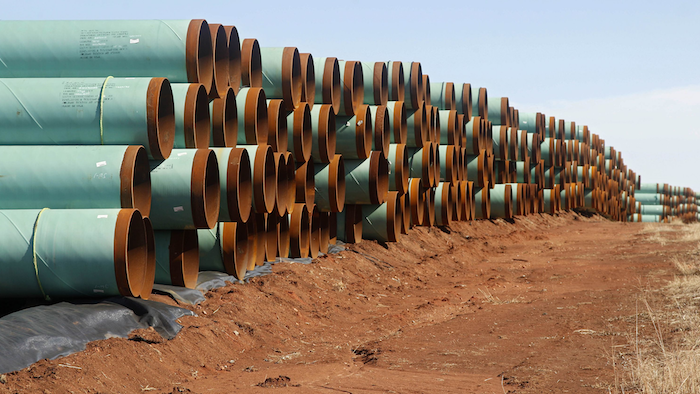 BISMARCK, N.D. (AP) — The Standing Rock Sioux Tribe is suing federal regulators for approving part of a $3.8 billion oil pipeline between North Dakota and Illinois that would be the biggest-capacity pipeline yet carrying oil out of the state's oil patch.

The lawsuit filed Wednesday in federal court in Washington challenges the U.S. Army Corps of Engineers' decision a day earlier to grant permits at more than 200 water crossings in four states for the Dakota Access pipeline. The line, being built by Dallas-based Energy Transfer Partners, would carry oil across South Dakota and Iowa to Illinois, where the crude would be shipped to Midwest and Gulf Coast refineries.

The tribe argues that the pipeline would impact drinking water and sacred sites on its 2.3-million acre reservation straddling the North Dakota-South Dakota border. The recently approved permits allow the pipeline to cross beneath the Missouri River twice, including less than a mile upstream of the reservation, home to about 8,000 people, according to Standing Rock Sioux Chairman Dave Archambault II.

"Our culture sites are at risk, our water is at risk and people are at risk," Archambault said Thursday, noting that protests against the pipeline have been ongoing for months. "This water is a life source, and not just for my people."

The lawsuit, filed on behalf of the tribe by environmental group Earthjustice, said the project violates several federal laws, including the National Historic Preservation Act.

Corps spokeswoman Eileen Williamson said she couldn't comment on pending litigation, but that the agency's review of the pipeline found "no significant impacts to the environment or historic properties." She said Corps officials "met with tribal leaders on several occasions" and did their best to allay concerns.

Construction has started in many areas along the more than 1,160-mile-long pipeline, which would carry 450,000 barrels of crude per day and could be expanded to 570,000 barrels daily — or more than half of North Dakota's current production.

Energy Transfer Partners officials didn't return phone calls seeking comment Thursday from The Associated Press. The company has said the pipeline will be a safe, cost-effective way to transport oil and that the project will create jobs. The company expects to complete the project late this year.

Under the company's plan, about 360 miles pipeline would pass through North Dakota in steel pipes varying in diameter from 12 inches to 30 inches buried at least 4 feet below ground. The company has said the pipelinewould include safeguards such as leak detection equipment.

Archambault, the tribal leader, said tribal members have been staging nonviolent protests for months at a "spirit camp" at the confluence of the Cannonball and Missouri rivers.

He also said more than a dozen young people from the reservation are running from North Dakota to Washington, to deliver the 140,000 petition signatures to the Corps to protest the pipeline. They are expected to arrive in early August, Archambault said.

"This is something they wanted to do and not something we told them to do," Archambault said. "Everybody feels hurt by this project, including our kids. We're really proud of them."