Undercover officers mingled with oil and gas protesters during a peaceful demonstration in a Denver suburb in May, providing "critical information" to commanders. 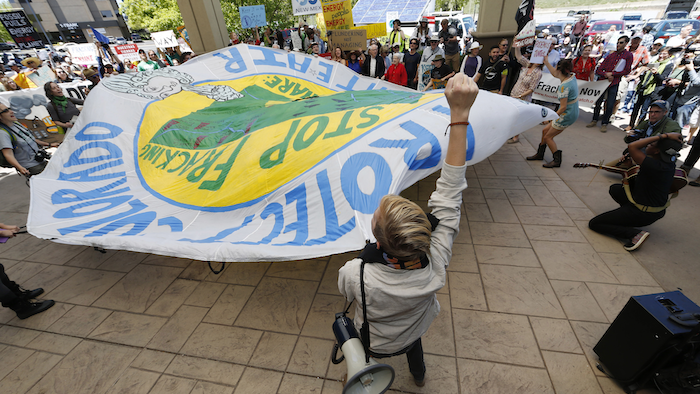 DENVER (AP) — Undercover officers mingled with oil and gas protesters during a peaceful demonstration in a Denver suburb in May, providing "critical information" to commanders, according to newly released Lakewood Police Department documents.

But police said Thursday the Lakewood officers were there only to keep the peace and weren't gathering information on individuals or posing as protesters, even though one document refers to the officers as embedded.

Spokesman Steve Davis said the critical information referred to in the document was that none of the protesters intended to be violent or get arrested.

"We didn't go in for names or anything like that, other than to see that the thing went peacefully," he said.

The Intercept website obtained the documents through an open records request and published them on Tuesday. Police confirmed they were authentic. 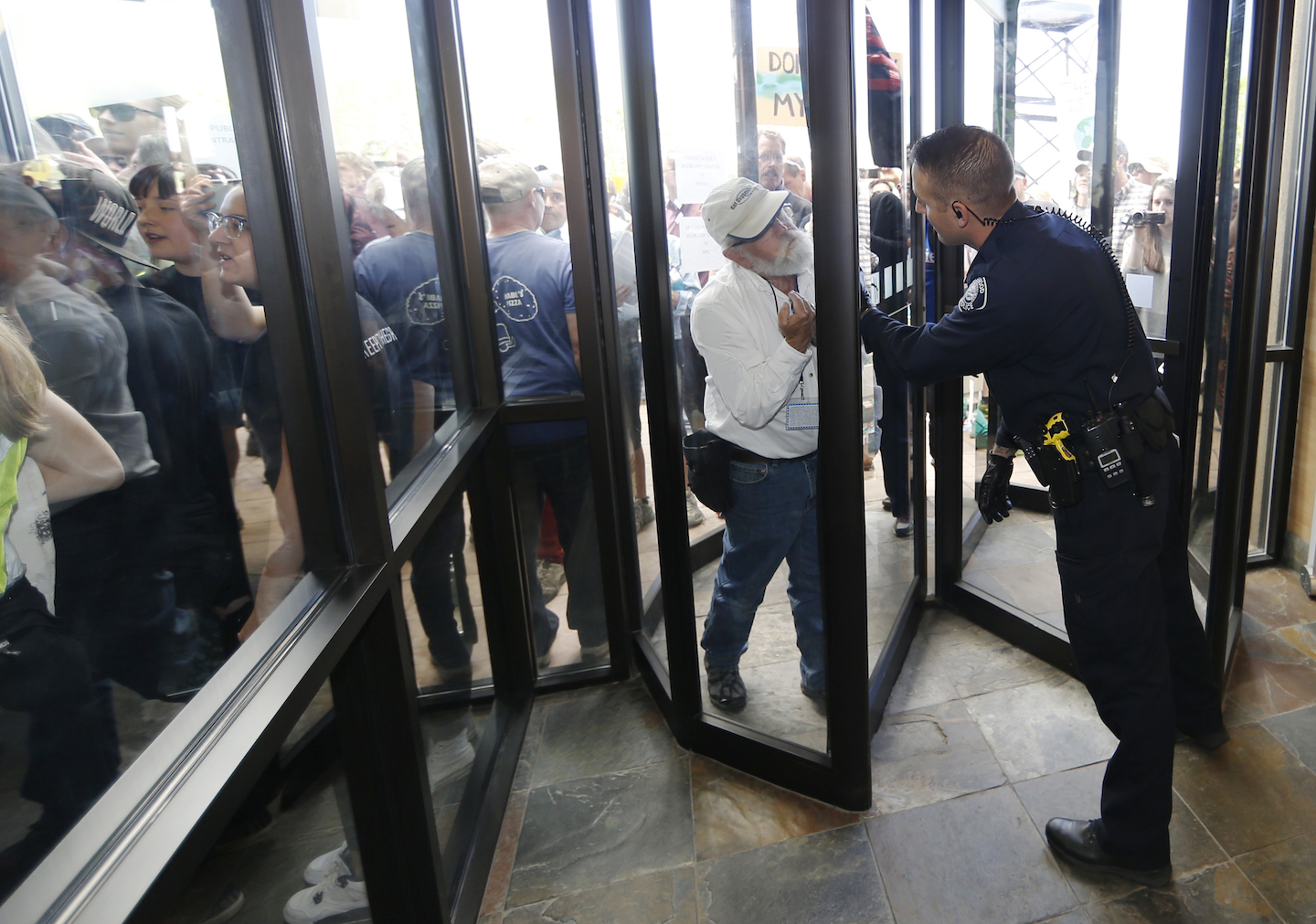 Police Department agent, right, blocks a revolving door so a protester can not enter the lobby of a hotel during an attempt to disrupt a federal auction of drilling rights at a hotel in Lakewood, Colo. More than 200 people turned out to protest the Bureau of Land Management sale. Newly released documents show undercover officers mingled with the protesters to provide information to police officials. (AP Photo/David Zalubowski, file)

The May 12 protest was at a hotel where the U.S. Bureau of Land Management was conducting an auction of oil and gas drilling rights on federal land. There were no arrests or violence, and the sale went off as planned, officials said.

The documents said undercover federal officers from the BLM also placed themselves among the protesters, providing information to commanders. BLM spokesman Steven Hall wouldn't confirm that.

Hall said the BLM took precautions because protesters had disrupted previous sales in Colorado and elsewhere.

Leaders of two groups that participated in the May protest — 350 Colorado and WildEarth Guardians — told The Associated Press they didn't plan to disrupt the sale, only protest.

Micah Parkin, executive director of 350 Colorado, said it was disturbing that protesters were considered potential threats.

"We're the voice of the people, just trying to protect the most basic of things — clean air, clean water, clean environment," she said.

Jeremy Nichols, climate and energy director for WildEarthGuardians, said he was more concerned about the involvement of BLM agents. He said the agency seems intent on avoiding public scrutiny.

Hall said the BLM is committed to transparency, and the public has multiple opportunities to comment on sales or formally object.

The BLM auctions are regular events, especially in the West, where federal land is abundant. They frequently draw protesters who say the fuels should be left in the ground to avoid hastening global warming. They also say the sales benefit private interests at the public's expense.

In 2011, activist Tim DeChristopher was sentenced to two years in prison after sabotaging an auction in Utah by successfully bidding $1.8 million for drilling rights without having the money to pay. He was convicted of interfering and making false representations.

Parkin and Nichols estimated that 300 to 400 demonstrators showed up at the protest in Lakewood. Davis said he hadn't seen a police estimate.

He said the police action at the May 12 sale was not an undercover operation, even though the documents described some of the personnel present as undercover officers. Davis said that is their role in other operations, such as drug investigations.

"They are undercover officers but they were not working this as an undercover operation," he said.

The documents also include a fact sheet from Anadarko Petroleum Crop. about protests planned around the world at about the time of the Lakewood protest. It warns Anadarko employees in Colorado to be alert for suspicious activities.

An Anadarko spokeswoman didn't respond to multiple phone calls seeking comment. Davis said he didn't know whether police had asked Anadarko for the information, or whether it had been helpful.

The documents show the BLM reimbursed Lakewood Police $2,500 to cover overtime and other expenses.