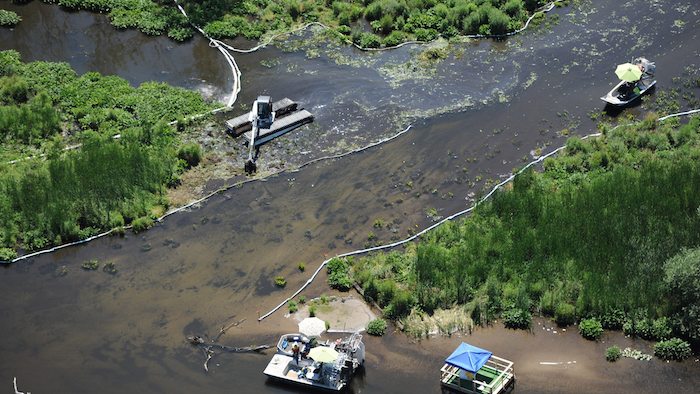 The settlement between U.S. government agencies and the Canadian company concluded years of negotiations following the release of an estimated 843,000 gallons of heavy crude in July 2010. The deal also requires measures to prevent future spills, detect leaks and prepare for emergencies across Enbridge's Lakehead network, a web of 14 pipelines extending more than 2,000 miles across seven states.

Particular scrutiny was required for twin underwater pipelines that cross the Straits of Mackinac, the waterway linking Lakes Huron and Michigan in northern Michigan, although the agreement does not call for shutting down those lines as many environmental activists have demanded. Officials with the U.S. Department of Justice and the Environmental Protection Agency who negotiated the deal said they didn't have the authority to require that. 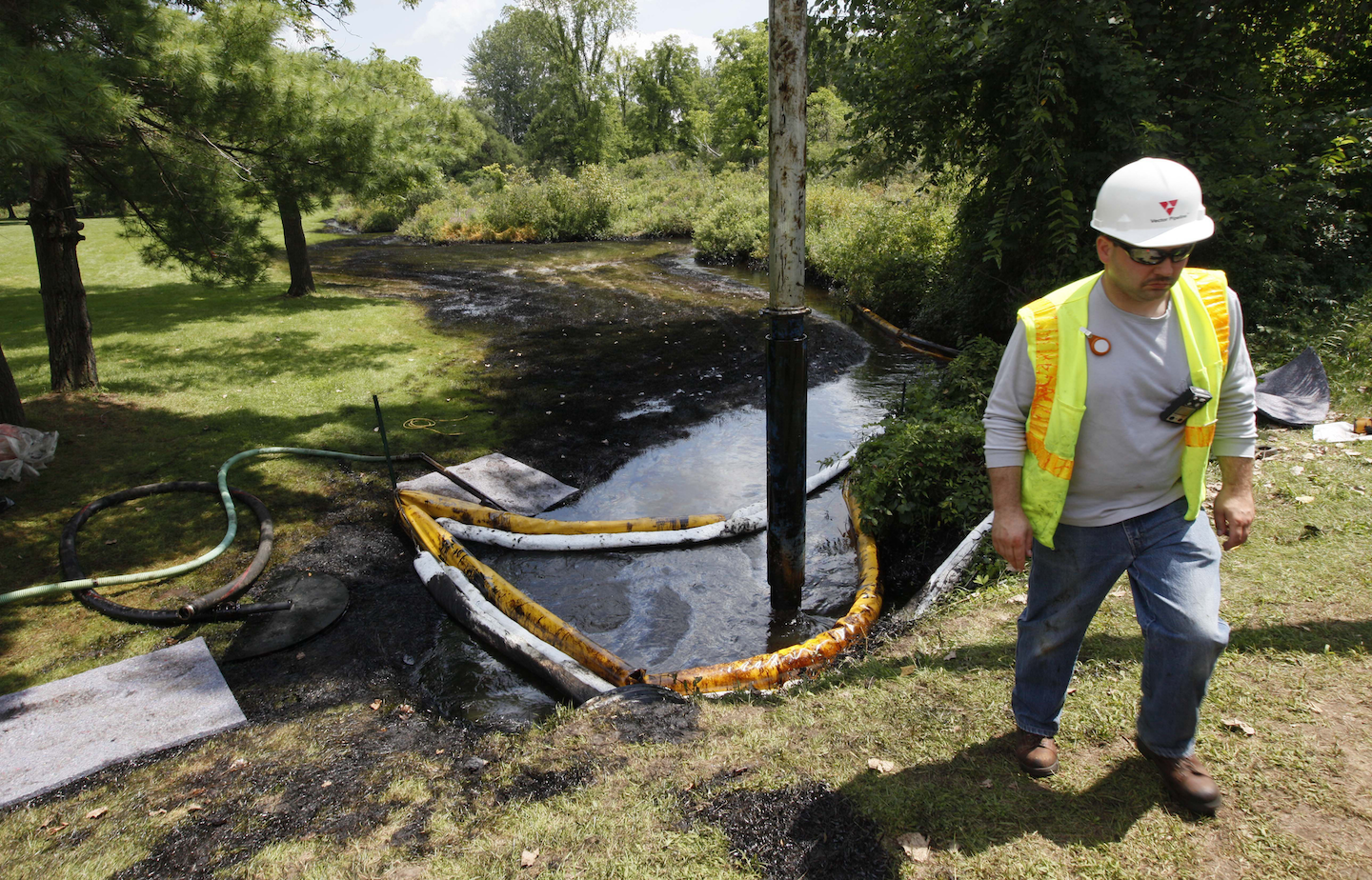 In this July 29, 2010 file photo, a worker monitors the water in Talmadge Creek in Marshall Township, Mich., near the Kalamazoo River as oil from a ruptured pipeline, owned by Enbridge Inc, is vacuumed out the water. (AP Photo/Paul Sancya, File)

Additionally, Enbridge pledged to replace 300 miles of a pipeline, pay $1 million for a separate 2010 spill in Romeoville, Illinois, and hire an independent auditor to make sure the company complies with the deal.

The penalty is the largest ever assessed for violations of the federal Clean Water Act except those stemming from the Deepwater Horizon spill in the Gulf of Mexico six years ago, said John Cruden, assistant attorney general for the Justice Department's environment and natural resources division.

"We think these very strong measures will go a long way to make sure this kind of disaster will not happen again," said Cynthia Giles, the EPA's assistant administrator for enforcement.

The settlement adds to the expenses Enbridge has incurred for the spill near Marshall, Michigan, which oozed into Talmadge Creek and then the Kalamazoo River. It damaged shorelines and wetlands, prompted an evacuation warning for some riverfront residents and harmed thousands of animals, birds and fish.

The company, based in Calgary, Alberta, has paid $1.2 billion for cleanup and environmental restoration, which was completed in 2014. It reached a $75 million deal with the state last year and bought 154 residences in the affected area. Company officials said the stepped-up inspections and spill prevention action under the federal settlement will cost an additional $110 million. A $5.4 million payment will reimburse federal costs and resolve Enbridge's liability under the Oil Pollution Act.

Enbridge's reputation also suffered. An investigation by the National Transportation Safety Board found that instrument tests had signaled the pipeline's degraded condition five years before the spill, but no one dug up the line for a closer look.

As oil oozed into the waterways, control center personnel in Canada misinterpreted alarms and made things worse by pumping even more oil into the line, investigators said. It took 17 hours for the company to realize what was happening.

"The experience, which has been very humbling, has made us a better organization today, and we're more focused than ever on ensuring the safety and reliability of our systems," said Brad Shamla, Enbridge's vice president for U.S. operations.

Enbridge has replaced the ruptured line, known as 6B, which begins in Griffith, Indiana, crosses southern Michigan and ends in Sarnia, Ontario. Under the settlement, it also will replace nearly 300 miles of Line 3 between Neche, North Dakota, and Superior, Wisconsin.

The company agreed to continue mechanical inspections of pipeline interiors and abide by prescribed timelines for excavations and repairs. Measures for the Straits of Mackinac pipelines include quarterly inspections using an acoustic leak detection tool, installation of pipeline supports and a study of whether the lines have moved since their 1953 installation. A study will consider adding an alternative leak detection system there.

"Most importantly, our safety culture has changed," Shamla said, acknowledging earlier shortcomings that Giles of EPA described as "an incredibly serious problem, as I think the size of this agreement and the stringency of the provisions make clear."

"Enbridge is appropriately paying a heavy penalty for those failures," Giles said.

The agreement was filed with the U.S. District Court for Michigan's Western District. After a 30-day public comment period, a judge will decide whether to accept it.