Working with the pharmaceutical, agricultural and biotechnology industries, the scientists hope to improve existing triterpenes to make better medicines with fewer side effects. 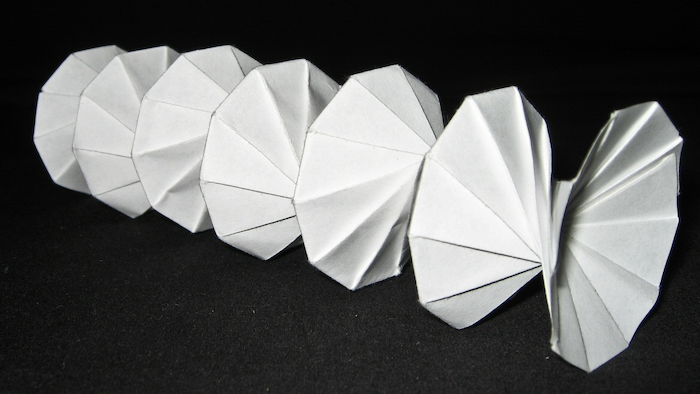 Following the discovery of a new and very valuable enzyme which folds linear molecules into different shapes, scientists at the John Innes Centre are building a 'triterpene machine' which will enable them to custom-build valuable chemical compounds called triterpenes and produce them in large, cost-effective quantities. Working with the pharmaceutical, agricultural and biotechnology industries, they hope to improve existing triterpenes to make better medicines with fewer side effects, or improve the specificity of pesticides. They also hope to make completely new, custom-designed triterpenes to any specification, which could lead to development of new anti-cancer drugs, agrochemicals, industrial chemicals or cosmetics.

In the ancient Japanese art of origami, different ways of folding a single sheet of paper can transform it into an aeroplane, a flower, or a bird. Plants perform origami too - not with paper, but with chemical compounds, taking individual precursor molecules and using enzymes to fold and modify them to create many different variations.

For several years, Professor Anne Osbourn of the John Innes Centre has been studying the 'chemical origami' that gives rise to a large group of plant compounds called triterpenes, many of which may have valuable uses in the pharmaceutical, agricultural and biotechnology industries.

"Some triterpenes are currently used in drinks as foaming agents, but there are many more exciting possibilities - new medical therapies such as anti-cancer drugs, diabetes medicines and antidepressants, for example; anti-fungal agents in crop protection, or cosmetic ingredients. All of the triterpenes we know about are based on a suite of similar molecular 'scaffolds' - we want to understand how these scaffolds are made, 'folded' and 'decorated' so that we might be able to engineer completely new triterpenes to make new medicines and industrial chemicals, or to improve those we already have."

In new research published in the scientific journal Proceedings of the National Academy of Sciences, Professor Osbourn, along with colleagues at the John Innes Centre and collaborators from the USA, describes how she discovered an important part of the triterpene origami process, almost by accident.

By analysing oat plants that had been exposed to a DNA-mutating chemical, the researchers "stumbled across" a handful of mutated versions of an enzyme called SAD1. SAD1 is a triterpene synthase enzyme responsible for a critical step in building triterpenes: in its normal form, it takes a linear precursor molecule called 2,3-oxidosqualene (OS for short), and turns it into a pentacyclic scaffold - a molecule with 5 carbon rings. This is then further modified by other enzymes to produce hundreds of different triterpene compounds.

However, one of the mutated forms, which differed from the normal form by one little change in the enzyme's structure, produced tetracyclic scaffolds with four carbon rings instead - the scaffold for a completely different set of triterpenes. Incidentally, the same mutation in an equivalent gene from a different plant, Arabidopsis thaliana, gave the same results, suggesting that this 'molecular switch' from pentacyclic to tetracyclic triterpene production is conserved between different plant species.

Next, the scientists tried putting the mutant SAD1 gene into yeast, a fast-growing, single-celled organism, to see if it could be used to make large quantities of triterpenes. Here, the team discovered that the SAD1 enzyme favoured dioxidosqualene (DOS) as a substrate rather than OS.

"This was an exciting discovery," said Professor Osbourn, "because we realised that we could not only modify the enzyme to produce different triterpene scaffolds, but we could also modify the building block to make different more highly oxygenated scaffolds."

The PNAS article presents just one part of ongoing work by the Osbourn lab to harness the power of genes and enzymes to generate high-value chemicals from plants.

"Here at the Norwich Research Park we're building a 'Triterpene Machine'; a toolkit of molecular parts we can put into yeast, or a recently developed rapid expression system using tobacco leaves, which we hope will allow us to custom-build valuable triterpenes and produce them in large, cost-effective quantities. Working with the pharmaceutical, agricultural and biotechnology industries, we hope we'll be able to modify known triterpenes to improve their existing applications - to make better medicines with fewer side effects, or improve the specificity of pesticides, for example. We might even be able to make completely new, custom-designed triterpenes to any specification we want, which could provide us with new anti-cancer drugs, agrochemicals, industrial chemicals or cosmetics. The possibilities are potentially endless!"

This research was funded by the Biotechnology and Biological Sciences Research Council, the John Innes Foundation and a Norwich Research Park Studentship Award.