An accidental byproduct of Oregon State University chemical research will soon be available in a wide range of brilliant blue coatings and plastics. 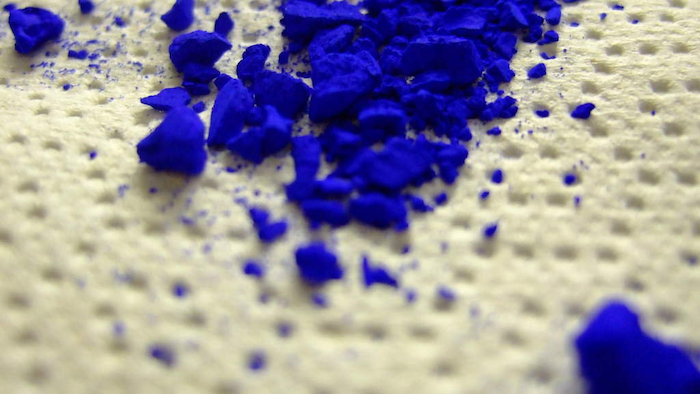 An accidental byproduct of Oregon State University chemical research will soon be available in a wide range of brilliant blue coatings and plastics.

The university recently announced an agreement to license its "near-perfect blue pigment," named YInMn blue, to Cincinnati-based The Shepherd Color Company, which produces complex inorganic pigments for a wide range of industries.

The material, however, wasn't discovered as part of an effort to develop new pigments. Instead, chemist Mas Subramanian and his research team hoped to evaluate materials' potential electronics properties.

“It was serendipity, actually; a happy, accidental discovery,” Subramanian said of the material.

In 2009, his team mixed manganese oxide, which appears black, with other chemicals and heated the samples to nearly 2,000 degrees Fahrenheit.

One sample developed a unique crystal structure that allowed the manganese ions to absorb red and green wavelengths and reflect a vivid blue. Subramanian said that while the crystal structure was known before, no one considered it for pigments or other commercial uses.

The material turned out to be especially stable and durable -- meaning it doesn't fade -- and could prove important to the construction industry. Paint or roofing materials featuring YInMn blue could reflect infrared light and help keep buildings cooler.

Most importantly, none of the pigment’s ingredients are toxic.

“Ever since the early Egyptians developed some of the first blue pigments, the pigment industry has been struggling to address problems with safety, toxicity and durability," Subramanian said.

Shepherd Color officials said that the first commercial quantities of the pigment will be available later this year.