California broke ground on its $68 billion high-speed rail system, promising to combat global warming while whisking travelers between Los Angeles and San Francisco in less than three hours. "We can afford it. In fact, we cannot NOT afford it," said Gov. Jerry Brown. 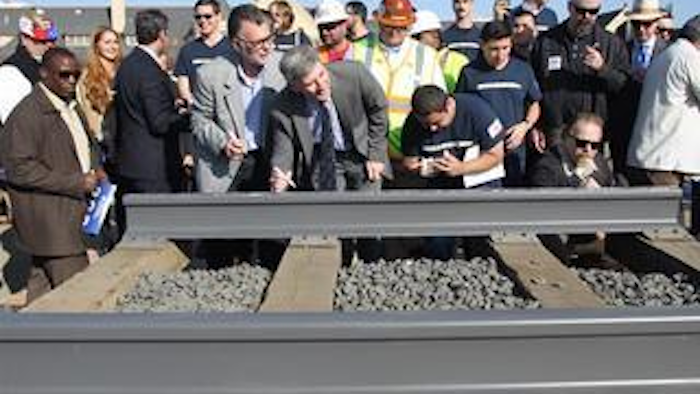 The bullet train project, the first in the nation to get underway, faces challenges from Republican cost-cutters in Congress and Central Valley farmers suing to keep the rails off their fields. Others doubt the state can deliver the sleek system as designed, and worry it will become an expensive failure.

But Gov. Jerry Brown said high-speed rail is essential to meeting his latest goal: Encouraging the nation's most populous state to get half its power from renewable energy by 2030.

"It's not that expensive. We can afford it. In fact, we cannot NOT afford it," Brown said before signing a symbolic section of rail. "All these projects are a little touch and go. You'll have these critics say 'why spend all this money?'"

"On the other hand I like trains, I like clean air," Brown said. "And I like to enjoy the comfort of trains. I like to get up and walk around and shake hands. You can't do that in your little car as you look in your rear view mirror."

One of the biggest public works endeavors in the country, California's high-speed rail is a signature project for Brown's political legacy, and supporters say it promises to boost the state's economy with thousands of jobs, including many in the Central Valley, which has been hard-hit by recession and drought.

Zooming through the Central Valley at 200 mph, the trains could unite northern and southern California like never before.

The high speed train tickets will be similar to the cost of air travel, promoters say, and deliver people to downtown stations, saving more time and money. Fares are projected to run from $81 to $89 one way between San Francisco and Los Angeles.

By comparison, riding Amtrak between east San Francisco Bay and Los Angeles now takes 11 to 19 hours, and costs $59 to $138 each way. That rivals the expense of an airline flight, which takes about an hour and 15 minutes.

By car, the journey takes at least 6 1/2 hours in the best traffic, and the price varies widely depending on the type of car, gasoline prices and highway tolls.

Gina McCarthy, administrator of the U.S. Environmental Protection Agency, said the all-electric trains, running on renewable energy, will take cars off highways and provide an effective alternative to flying on jet fuel, which pumps far more greenhouse gas into the atmosphere.

About a dozen protesters shouted "show me the money" during the groundbreaking, which was held in an industrial section of downtown Fresno, where the city's bullet train station will be located near old rail lines that still ship produce and other cargo. The system will initially share existing rails with freight trains, but eventually travel at higher speeds on dedicated rails, California High-Speed Rail Authority chairman Dan Richard said.

The authority needs to speed up the eminent domain process, since only 100 of the 500 land parcels needed for the rails and stations have been purchased. But Richard said "voters are going to get exactly what they asked for."

Californians approved a nearly $10 billion bond for the train in 2008, and in 2012 the Obama administration dedicated $3.3 billion in stimulus funds. Part of the greenhouse gas fees to be collected under the state's cap-and-trade program also will go to the train.

Bullet train systems make money in other countries, and California officials are banking on this one to entice private investments and development around the stations to offset the costs.

The initial work is on a 142-mile stretch north and south of Fresno. By 2029, planners hope to complete 520 miles of rails linking the San Francisco's downtown Transbay Terminal to Union Station in downtown Los Angeles.

"Are we capable of making similar serious investments for future generations? The answer is not only yes we can, but yes we will," said U.S. Rep. Jim Costa, a Central Valley Democrat.

Rep. Jeff Denham, a Central Valley Republican, has vowed to block funding, since he doubts the trains will be as fast or carry as many riders as promised. "It's hard to celebrate breaking ground on what is likely to become abandoned pieces of track," he said Monday.

But project managers say 632 people are already designing and planning a system that will produce 20,000 jobs a year now that construction has begun.

Fresno's Republican Mayor Ashley Swearengin backs it, saying it will create jobs in the short term and eventually connect the Central Valley to the rest of the state's economy.

"We're stuck right in the middle, and it's difficult to get in and out," she said. "It fills a deficit for Central California."