The Next Great Breakthrough For Chemical Manufacturing?

Chemists at The Scripps Research Institute have invented a powerful method for joining complex organic molecules that is extraordinarily robust and can be used to make pharmaceuticals, fabrics, dyes, plastics and other materials previously inaccessible to chemists. 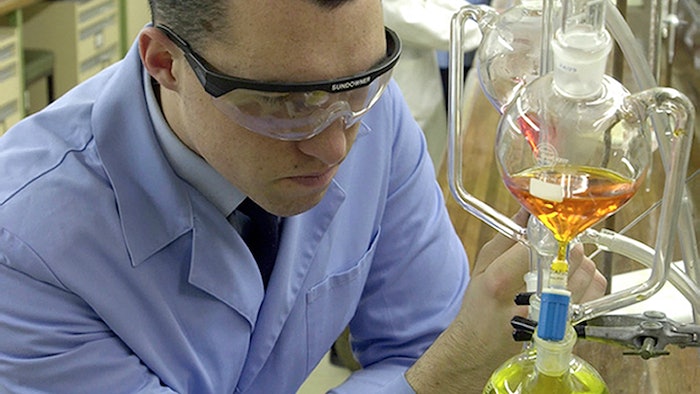 Chemists at The Scripps Research Institute (TSRI) have invented a powerful method for joining complex organic molecules that is extraordinarily robust and can be used to make pharmaceuticals, fabrics, dyes, plastics and other materials previously inaccessible to chemists.

“We are rewriting the rules for how one thinks about the reactivity of basic organic building blocks, and in doing so we’re allowing chemists to venture where none has gone before,” said Phil S. Baran, the Darlene Shiley Chair in Chemistry at TSRI, whose laboratory reports the finding on functionalized olefin cross-coupling this week in Nature.

With the new technique, scientists can join two compounds known as olefins to create a new bond between their carbon-atom backbones. Carbon-to-carbon coupling methods are central to chemistry, but until now have been plagued by certain limitations: they often fail if either of the starting compounds contains small, reactive regions known as “functional groups” attached to their main structure. They also frequently don’t work well in the presence of “heteroatoms”—non-carbon atoms such as nitrogen, oxygen and iodine—despite the importance of these types of atoms in chemical synthesis.

The new method is what chemists call “mild,” meaning that it doesn’t require the use of extreme temperatures or pressures, nor harsh chemicals. As a result, portions of the building blocks used that are particularly fragile remain unaltered by the reaction.

“Functional groups that would be destroyed by other cross-coupling methods are totally unscathed when using our method,” said Julian C. Lo, a graduate student who was a co-lead author of the report with Research Associate Jinghan Gui.

Natural Products as Launching Pad
The innovation arose from a Baran laboratory project to synthesize natural compounds found in traditional Chinese medicines. As they developed a technique for constructing the desired molecules in the lab, the researchers recognized that they could adapt the technique to join two relatively simple olefins together, as they reported in January 2014 in the Journal of the American Chemical Society.

The next step was to adapt the technique in order to combine more complex olefins attached to heteroatoms, which is reported in the new Nature paper.

“The reaction setup is easy,” said Gui. “We use a simple iron catalyst, a commercially available silane and ethanol [i.e., grain alcohol] as the solvent; and we can do the reaction in an open flask, meaning that we don’t need to exclude air or moisture.”

Lo, Gui and their colleagues demonstrated the robustness of their reaction by taking an unconventional approach and running it in vodka, gin, whiskey, tequila, beer and wine instead of pure alcohol. “Think of wine—it has this incredibly complex flavor because of the hundreds of compounds in it besides alcohol. And yet our reaction is still able to proceed in that mess, whereas traditional coupling techniques can’t even handle water that well,” said Lo.

Immediate Applications, New Vistas
Importantly, the chemists showed that their reaction can be used to make compounds that were previously either unpractical to synthesize or couldn’t have been made at all. In their report they described making more than 60 compounds with the new method. “Around 90 percent of these are new chemical entities,” said Baran. “We expect that this method will have immediate application to pharmaceuticals, materials, and even agricultural and fragrance chemistry.”

Indeed Baran already has used the method to help one company solve a difficult chemical synthesis problem, and has disseminated the method’s details to other researchers at scientific meetings. Beyond the immediate practical applications, the new method removes some significant constraints on chemists’ thinking, essentially opening up new worlds of possibilities.

“This new chemistry allows for bond constructions that have previous been simply unimaginable,” said Baran.